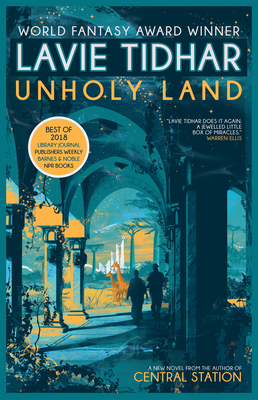 Selected as a Best Book of 2018 by NPR Books, Library Journal, Publishers Weekly, and the UK Guardian. From the bestselling author of Central Station comes an extraordinary new novel recalling China Mi ville and Michael Chabon, entertaining and subversive in equal measures. Lior Tirosh is a semi-successful author of pulp fiction, an inadvertent time traveler, and an ongoing source of disappointment to his father. Tirosh has returned to his homeland in East Africa. But Palestina--a Jewish state founded in the early 20th century--has grown dangerous. Unrest in Ararat City is growing; the government is building a vast border wall to keep out African refugees. Tirosh has become state security officer Bloom's prime murder suspect, while rogue agent Nur stalks them through transdimensional rifts--possible futures to prevented only by avoiding the mistakes of the past.

Lavie Tidhar (A Man Lies Dreaming, Unholy Land) is an acclaimed author of literature, science fiction, fantasy, graphic novels, and middle grade fiction. Tidhar received the Campbell and Neukom Literary awards for his breakout novel Central Station, which has been translated into more than ten languages. He has also received the British Science Fiction, British Fantasy, and World Fantasy Awards. Tidhar's recent books include the Arthurian satire By Force Alone, and the series Adler. He is a book columnist for the Washington Post, and recently edited the Best of World SF anthology. Tidhar has lived all over the world, including Israel, Vanuatu, Laos, and South Africa, and he currently resides with his family in London.
Loading...
or support indie stores by buying on
(This book is on backorder)