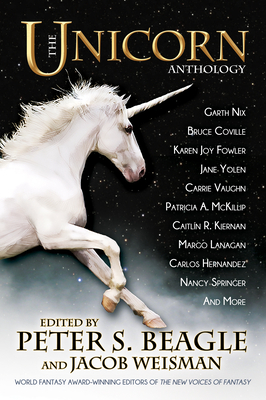 "What a treasure trove "
--Sarah Beth Durst, author of Queen of the Blood Unicorns: Not just for virgins anymore. Here are sixteen lovely, powerful, intricate, and unexpected unicorn tales from fantasy icons including Garth Nix, Peter S. Beagle, Patricia A. McKillip, Bruce Coville, Carrie Vaughn, and more. In this volume you will find two would-be hunters who enlist an innkeeper to find a priest hiding the secret of the last unicorn. A time traveler tries to corral an unruly mythological beast that might never have existed at all. The lover and ex-boyfriend of a dying woman join forces to find a miraculous remedy in New York City. And a small-town writer of historical romances discovers a sliver of a mysterious horn in a slice of apple pie.

Peter S. Beagle is the internationally bestselling and much-beloved author of numerous classic fantasy novels and collections, including The Last Unicorn, A Fine & Private Place, The Overneath, The Line Between, Sleight of Hand, Summerlong, and In Calabria. Beagle is the recipient of the Hugo, Nebula, Mythopoeic, World Fantasy, and Locus awards, as well as the Grand Prix de l'Imaginaire. He is the editor of The Secret History of Fantasy and the co-editor of The Urban Fantasy Anthology. Beagle lives in Richmond, California, where he is working on too many projects to even begin to name. Jacob Weisman is the publisher at Tachyon Publications, which he founded in 1995. He is a three-time World Fantasy Award nominee and is the editor of Tachyon's critically acclaimed, Hugo, Nebula, and Shirley Jackson award-winning novella series. Weisman has edited the anthologies The New Voices of Fantasy (with Peter S. Beagle), Invaders: 22 Tales from the Outer Limits of Literature, The Sword & Sorcery Anthology (with David G. Hartwell), and The Treasury of the Fantastic (with David M. Sandner). He lives in San Francisco.
Loading...
or support indie stores by buying on
(This book is on backorder)