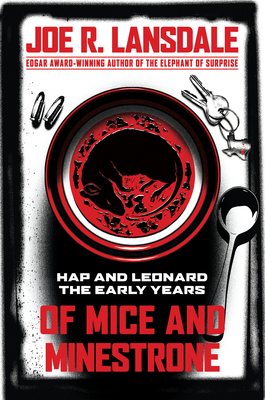 Of Mice and Minestrone

Hap and Leonard: The Early Years

A brand-new Hap and Leonard series collection chock full of Joe R. Lansdale's inimitable blend of humor, mayhem, and insight, Of Mice and Minestrone delivers never-before-seen stories, a selection of the boys' favorite recipes, by Kasey Lansdale, and an introduction from New York Times bestselling crime author Kathleen Kent. "An absolute treasure trove."--Ace Atkins, author of The Shameless "Of Mice and Minestrone is classic Lansdale at his legendary best.... Compelling. Hilarious. Poignant--NY Journal of Books Today's Special: Justice, East Texan-Style Hap Collins looks like a good ol' boy. But even in his misspent youth, his best pal is Leonard Pine, who is black, gay, and the ultimate outsider. Inseparable friends, Hap and Leonard climb into the boxing ring, visit their families, get in bar fights, and just go fishing--all the while confronting racists, righting wrongs, and eating a whole lot of delicious food. So pull up a seat and sit a spell. Master storyteller Joe R. Lansdale--along with Kasey Lansdale's down-home recipes and Kathleen Kent's introduction--has cooked up a new passel of tales for you about the unlikeliest duo East Texas has to offer, created by his own self. About the Hap and Leonard short story series
Hap and Leonard
Hap and Leonard: Blood and Lemonade
The Big Book of Hap and Leonard
(digital only) Lansdale's duo made their screen debuts in the three season Hap and Leonard television series, starring Michael K. Williams (The Wire), James Purefoy (The Following), and Christina Hendricks (Mad Men).

Joe R. Lansdale is the internationally-bestselling author of over fifty novels, including the popular, long-running Hap and Leonard series. Many of his cult classics have been adapted for television and film, most famously Bubba Ho-Tep, starring Bruce Campbell and Ossie Davis. Lansdale has written numerous screenplays and teleplays, including for the iconic Batman the Animated Series. He has won an Edgar Award for The Bottoms, ten Stoker Awards, and has been designated a World Horror Grandmaster. Lansdale, like many of his characters, lives in East Texas. New York Times bestselling author Kathleen Kent's fourth book, titled The Dime, is a contemporary crime novel set in Dallas, nominated by both the Edgar Awards and the Nero Awards for Best Novel. The sequel to The Dime, titled The Burn, will be published in February 2020. Ms. Kent is also the author of three bestselling and award-winning historical novels, The Heretic's Daughter, The Traitor's Wife, and The Outcasts.
Loading...
or support indie stores by buying on