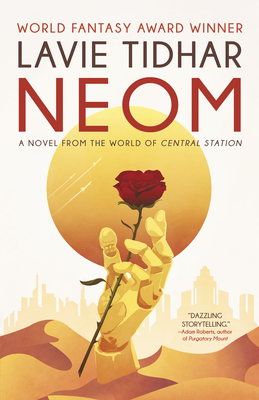 A Novel from the World of Central Station

Today, Neom is a utopian dream--a megacity of the future yet to be built in the Saudi desert. In this deeply imaginative novel from the award-winning universe of Central Station, far-future Neom is already old. Sentient machines roam the desert searching for purpose, works of art can be more deadly than weapons, and the spark of a long-overdue revolution is in the wind. Only the rekindling of an impossible love affair may slow the inevitable sands of time. "This is Tidhar at his best: the crazily proliferating imagination, the textures, the ideas, the dazzling storytelling. A brilliant portrait of community and its possibilities."
--Adam Roberts, author of Purgatory Mount The city known as Neom is many things to many beings, human or otherwise. It is a tech wonderland for the rich and beautiful; an urban sprawl along the Red Sea; and a port of call between Earth and the stars. In the desert, young orphan Elias has joined a caravan, hoping to earn his passage off-world. But the desert is full of mechanical artefacts, some unexplained and some unexploded. Recently, a wry, unnamed robot has unearthed one of the region's biggest mysteries: the vestiges of a golden man. In Neom, childhood affection is rekindling between loyal shurta-officer Nasir and hardworking flower-seller Mariam. But Nasu, a deadly terrorartist, has come to the city with missing memories and unfinished business. Just one robot can change a city's destiny with a single rose--especially when that robot is in search of lost love. Lavie Tidhar's (Unholy Land, The Escapement) newest lushly immersive novel, Neom, which includes a guide to the Central Station-verse, is at turns gritty, comedic, transportive, and fascinatingly plausible.

British Science Fiction, British Fantasy, and World Fantasy Award winning author Lavie Tidhar (A Man Lies Dreaming, The Escapement, Unholy Land, The Hood) is an acclaimed author of literature, science fiction, fantasy, graphic novels, and middle grade fiction. Tidhar received the Campbell, Xingyun, and Neukom awards for the novel Central Station. In addition to his fiction and nonfiction, Tidhar is the editor of the Apex Best of World Science Fiction series and a columnist for the Washington Post. His speaking appearances include Cambridge University, PEN, and the Singapore Writers Festival. He has been a Guest of Honour at book conventions in Japan, Poland, Spain, Germany, Sweden, Denmark, China, and elsewhere; he is currently a visiting professor and writer in residence at the American International University. Tidhar currently resides with his family in London.
Loading...
or support indie stores by buying on