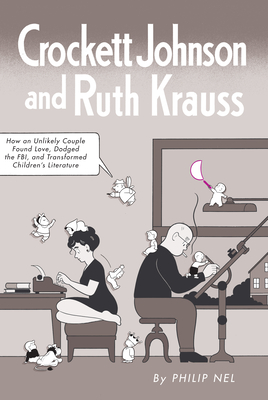 Crockett Johnson (born David Johnson Leisk, 1906-1975) and Ruth Krauss (1901- 1993) were a husband-and-wife team that created such popular children's books as The Carrot Seed and How to Make an Earthquake. Separately, Johnson created the enduring children's classic Harold and the Purple Crayon and the groundbreaking comic strip Barnaby. Krauss wrote over a dozen children's books illustrated by others and pioneered the use of spontaneous, loose-tongued kids in children's literature. Together, Johnson and Krauss's style--whimsical writing, clear and minimalist drawing, and a child's point of view--is among the most revered and influential in children's literature and cartooning, inspiring the work of Maurice Sendak, Charles M. Schulz, Chris Van Allsburg, and Jon Scieszka. This critical biography examines their lives and careers, including their separate achievements when not collaborating. Using correspondence, sketches, contemporary newspaper and magazine accounts, archived and personal interviews, author Philip Nel draws a compelling portrait of a couple whose output encompassed children's literature, comics, graphic design, and the fine arts. Their mentorship of nowfamous illustrator Maurice Sendak (Where the Wild Things Are) is examined at length, as is the couple's appeal to adult contemporaries such as Duke Ellington and Dorothy Parker. Defiantly leftist in an era of McCarthyism and Cold War paranoia, Johnson and Krauss risked collaborations that often contained subtly rendered liberal themes. Indeed, they were under FBI surveillance for years. Their legacy of considerable success invites readers to dream and to imagine, drawing paths that take them anywhere they want to go.

Philip Nel is assistant professor of English at Kansas State University. He is author of J. K. Rowling's Harry Potter Novels: A Reader's Guide. He has been published in Children's Literature, Modern Fiction Studies, Critique: Studies in Contemporary Fiction, and Mosaic: A Journal for the Interdisciplinary Study of Literature.
Loading...
or support indie stores by buying on