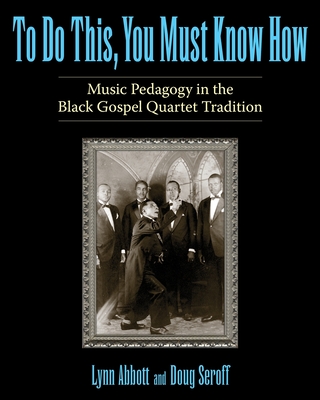 To Do This, You Must Know How

To Do This, You Must Know How traces black vocal music instruction and inspiration from the halls of Fisk University to the mining camps of Birmingham and Bessemer, Alabama, and on to Chicago and New Orleans. In the 1870s, the Original Fisk University Jubilee Singers successfully combined Negro spirituals with formal choral music disciplines, and established a permanent bond between spiritual singing and music education. Early in the twentieth century there were countless initiatives in support of black vocal music training conducted on both national and local levels. The surge in black religious quartet singing that occurred in the 1920s owed much to this vocal music education movement.

In Bessemer, Alabama, the effect of school music instruction was magnified by the emergence of community-based quartet trainers who translated the spirit and substance of the music education movement for the inhabitants of working-class neighborhoods. These trainers adapted standard musical precepts, traditional folk practices, and popular music conventions to create something new and vital

Bessemer's musical values directly influenced the early development of gospel quartet singing in Chicago and New Orleans through the authority of emigrant trainers whose efforts bear witness to the effectiveness of trickle down black music education. A cappella gospel quartets remained prominent well into the 1950s, but by the end of the century the close harmony aesthetic had fallen out of practice, and the community-based trainers who were its champions had virtually disappeared, foreshadowing the end of this remarkable musical tradition.

Doug Seroff (Author) Doug Seroff is an independent scholar living in Greenbrier, Tenn. His work has appeared in American Music, Black Music Research Newsletter, Blues Unlimited, and Record Exchanger, among others. A leading expert on black gospel quartet singing for twenty-five years, he has written chapters published in anthologies and many scholarly essays for a wide variety of journals.Lynn Abbott (Author) Lynn Abbott is an independent scholar living in New Orleans. His work has been published in American Music, 78 Quarterly, American Music Research Center Journal, and The Jazz Archivist.
Loading...
or
Not Currently Available for Direct Purchase