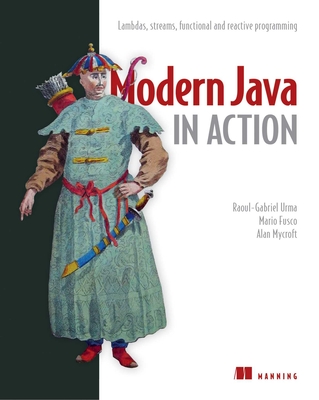 Manning's bestselling Java 8 book has been revised for Java 9! In Modern Java in Action, you'll build on your existing Java language skills with the newest features and techniques.

Purchase of the print book includes a free eBook in PDF, Kindle, and ePub formats from Manning Publications.

Modern Java in Action connects new features of the Java language with their practical applications. Using crystal-clear examples and careful attention to detail, this book respects your time. It will help you expand your existing knowledge of core Java as you master modern additions like the Streams API and the Java Module System, explore new approaches to concurrency, and learn how functional concepts can help you write code that's easier to read and maintain.

Raoul-Gabriel Urma is CEO of Cambridge Spark. Mario Fusco is a senior software engineer at Red Hat. Alan Mycroft is a University of Cambridge computer science professor; he cofounded the Raspberry Pi Foundation.

Raoul-Gabriel Urma is CEO and co-founder of Cambridge Spark, a leading learning community for data scientists and developers in UK. In addition, he is also Chairman and co-founder of Cambridge Coding Academy, a growing community of young coders and pre-university students. Raoul is author of the bestselling programming book "Java 8 in Action" which sold over 20,000 copies globally. Raoul completed a PhD in Computer Science at the University of Cambridge. In addition, he holds a MEng in Computer Science from Imperial College London and graduated with first class honours having won several prizes for technical innovation. Raoul has delivered over 100 technical talks at international conferences. He has worked for Google, eBay, Oracle, and Goldman Sachs. He is also a Fellow of the Royal Society of Arts.

Mario Fusco is a senior software engineer at Red Hat working on Drools, the JBoss rule engine. He created the open source library lambdaj, an internal Java DSL for manipulating collections in a functional way.

Alan Mycroft is Professor of Computer Science at the University of Cambridge, where he researches programming languages, their semantics, optimization and implementation. He is a co-founder and Trustee of the Raspberry Pi Foundation.
Loading...
or support indie stores by buying on