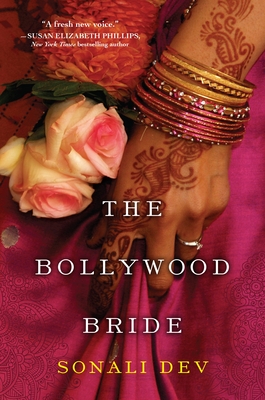 Ria Parkar is Bollywood's favorite Ice Princess--beautiful, poised, and scandal-proof--until one impulsive act threatens to expose her destructive past. Traveling home to Chicago for her cousin's wedding offers a chance to diffuse the coming media storm and find solace in family, food, and outsized celebrations that are like one of her vibrant movies come to life. But it also means confronting Vikram Jathar.

Ria and Vikram spent childhood summers together, a world away from Ria's exclusive boarding school in Mumbai. Their friendship grew seamlessly into love--until Ria made a shattering decision. As far as Vikram is concerned, Ria sold her soul for stardom and it's taken him years to rebuild his life. But beneath his pent-up anger, their bond remains unchanged. And now, among those who know her best, Ria may find the courage to face the secrets she's been guarding for everyone else's benefit--and a chance to stop acting and start living.

Rich with details of modern Indian-American life, here is a warm, sexy, and witty story of love, family, and the difficult choices that arise in the name of both.

Sonali Dev's first literary work was a play about mistaken identities performed at her neighborhood Diwali extravaganza in Mumbai. She was eight years old. Despite this early success, Sonali spent the next few decades getting degrees in architecture and written communication, migrating across the globe, and starting a family while writing for magazines and websites. With the advent of her first gray hair her love for telling stories returned full force, and she now combines it with her insights into Indian culture to conjure up stories that make a mad tangle with her life as supermom, domestic goddess, and world traveler. Sonali is an active member of RWA and WFWA. She lives in the Chicago suburbs with her very patient and often amused husband and two teens who demand both patience and humor, and the world's most perfect dog. Visit her on the web at sonalidev.com.

Praise For The Bollywood Bride…

"The characters are so richly drawn, the writing is utterly breathtaking. . .A voice like none other. I highly recommend you read this book." –Kristan Higgins, New York Times bestselling author

"All the ingredients for a Bollywood movie can be found in this charming romance. . .A contemporary, transcontinental romance told with a light touch and lots of sizzle."   --Library Journal, A Best Romance of 2014 Selection

"Leaves readers with a greater understanding and appreciation of Indian traditions while beautifully capturing the struggle between familiar duty and self-discovery." –Booklist

"As intricate as a henna tattoo and as sweet as gulab juman. . .Captures all the glamour, mix-ups and humor of a classic Bollywood film." –Shelf Awareness

"Make note of the name Sonali Dev! Based on this marvelous debut, Dev is set to become a star. . .An absolute winner from beginning to end, this spellbinding tale grabs your heart and never lets go!" –RT Book Reviews, 4.5 Stars, TOP PICK
or
Buy Here
Copyright © 2020 American Booksellers Association