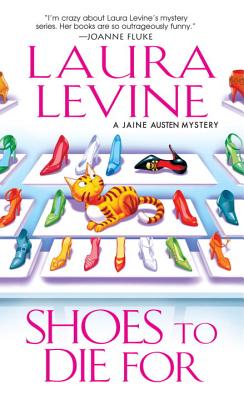 Shoes to Die For (A Jaine Austen Mystery #4)

If clothes make the man, then what do Jaine Austen's elastic-waist pants and T-shirts make her? A fashion nightmare, according to her neighbor, Lance. She doesn't expect Lance--who works in the designer shoe department at Nieman Marcus--to understand. . .which is how she ends up visiting his favorite boutique, Passions. While the couture is definitely not for Jaine, the staff's gossip is. Tiny orange-haired clerk Becky starts complaining about her co-worker Giselle--a.k.a. "Frenchie"-- a brittle blonde who, when she's not making fun of customers behind their backs, adds extra-marital notches to her Chanel belt. Though Jaine doesn't land a new look, she does land a new job when Passions' owner gives her a chance to write their new magazine ads.

But when Jaine arrives the next morning to pitch her ideas, she finds Frenchie pitched over, stabbed in the neck by one of her own stilettos. Now all Jaine has to do is figure out who hated Frenchie the most, in a case of death by designer knock-off. . .

LAURA LEVINE is a comedy writer whose television credits include The Bob Newhart Show, Laverne & Shirley, The Love Boat, The Jeffersons, Three’s Company, and Mary Hartman, Mary Hartman. Her work has been published in The Washington Post and The Los Angeles Times. She lives in Los Angeles, and is currently working on the next Jaine Austen mystery. Readers can reach her on Facebook (Laura Levine Mysteries), or her website: www.JaineAustenMysteries.com.
Loading...
or
Not Currently Available for Direct Purchase