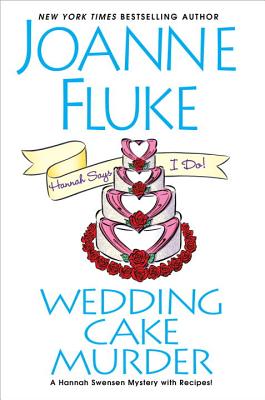 “Lively…Add the big surprise ending, and fans will be more than satisfied.” —Publishers Weekly

“Fluke offers a new twist to the series…the cookie-shop owner’s character gains depth…but there’s still room for recipes and for Hannah to move toward an overdue decision on the question of which of her two boyfriends she prefers. Readers will be eager for the next installment.” —Booklist

“Culinary cozies don’t get any tastier than this winning series.” —Library Journal

“If your reading habits alternate between curling up with a good mystery or with a good cookbook, you ought to know about Joanne Fluke.” —The Charlotte Observer

“Fans of this wildly popular series will not be disappointed. Fluke has kept this series strong for a long time, and there is still plenty to enjoy for foodie crime fans.” —Booklist

JOANNE FLUKE is the New York Times bestselling author of the Hannah Swensen mysteries, which include Double Fudge Brownie Murder, Blackberry Pie Murder, Cinnamon Roll Murder, and the book that started it all, Chocolate Chip Cookie Murder. That first installment in the series premiered as Murder, She Baked:  A Chocolate Chip Cookie Mystery on the Hallmark Movies & Mysteries Channel. Like Hannah Swensen, Joanne Fluke was born and raised in a small town in rural Minnesota, but now lives in Southern California. Please visit her online at www.JoanneFluke.com
Loading...
or
Not Currently Available for Direct Purchase