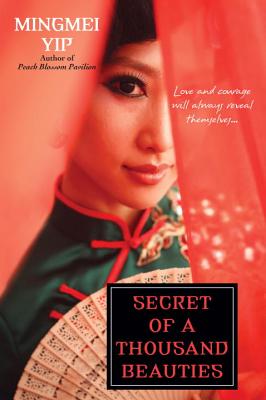 Secret of a Thousand Beauties (Paperback)

Spring Swallow was promised in marriage while still in her mother's belly. When the groom dies before a wedding can take place, seventeen-year-old Spring Swallow is ordered to become a ghost bride to appease his spirit. Under her in-laws' protection, she will be little more than a servant, unable to know real love or bear children. Refusing to accept her fate as a "bad-luck woman," Spring Swallow flees on her wedding day.

In the city of Soochow, Spring Swallow joins a community of renowned embroiderers. The women work for Aunty Peony, whose exquisite stitching once earned her the Emperor's love. But when Aunty Peony agrees to replicate a famous painting--a lucrative assignment that will take a year to complete--betrayal and jealousy emerges within the group. Spring Swallow becomes entangled in each woman's story of heartbreak, even while she embarks on a dangerous affair with a young revolutionary. On a journey that leads from the remote hillsides around Soochow to cosmopolitan Peking, Spring Swallow draws on the secret techniques learned from Aunty Peony and her own indomitable strength, determined to forge a life that is truly her own.

Praise For The Novels Of Mingmei Yip

"A serious, engaging story of faith, devotion, and the commingling of cultures." –Booklist on Petals From the Sky

Mingmei Yip was born in China and received her Ph.D. from the University of Paris, Sorbonne. She has written for major Hong Kong newspapers, and has appeared on many national and international television and radio programs. She immigrated to the United States in 1992, where she now lives in New York City with her husband. Her novels have been published in ten different languages and she is also an accomplished musician and calligrapher. Visit her at www.mingmeiyip.com.
or
Not Currently Available for Direct Purchase
Copyright © 2020 American Booksellers Association