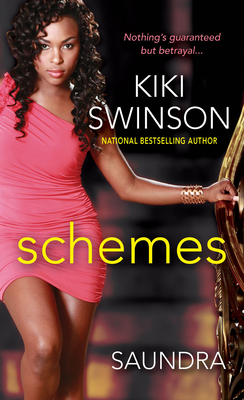 Karlie Houston hasn't seen a raise in forever, but the payday loan office she manages is raking in the cash. So why not get what she's rightfully owed by masterminding a heist? Once her lover Sidney's boys hit all the company's locations at one time, there's a fortune to split. But suddenly bodies start dropping—and Karlie better devise the perfect plan to survive…

Raised by a ruthless mother, Yazz Armstrong lives by “scheme or die.” So she's cool with helping her man, Kevon, take control of head dealer Caesar’s territory. And when the fallout racks up unexpected casualties, Yazz finds Caesar's bed a refuge—and his empire hers to help rule. Too bad someone with an even more lethal agenda won't stop ’til Yazz and her dreams crash and burn for good…

“Kiki captures the heat of the streets.”
—Wahida Clark

“Saundra offers insight into the ruthless drug game but also offers hope and redemption. Fans of Sistah Souljah’s groundbreaking The Coldest Winter Ever will immediately note similarities to that powerful novel in Saundra’s writing.”
—Library Journal on Her Sweetest Revenge

Kiki Swinson is the nationally bestselling author of over forty novels and short stories. Swinson’s works feature resilient women making tough—and sometimes not quite legal—decisions to survive. Her novels, inspired by her experiences and a five‑year stint in federal prison, have sold over 2.4 million copies. She completed her first novel while incarcerated and her second novel, Wifey, went on to become a #1 Essence bestseller and the first installment in one of today’s most popular urban series. A native of Portsmouth, Virginia—and a former hustler’s wife—Swinson resides in Virginia Beach, Virginia. Visit her online at KikiMedia.net.

SAUNDRA grew up in Cleveland, Mississippi, and now lives in Indiana with her family. Saundra’s stories highlight fearless females who hustle to get what they deserve. Her debut novel, Her Sweetest Revenge, began the series that won praise for being a “roller-coaster ride” and “drama at its best.” Saundra is active on Twitter @AuthorSaundra and loves to hear from readers.
or support indie stores by buying on
Copyright © 2020 American Booksellers Association