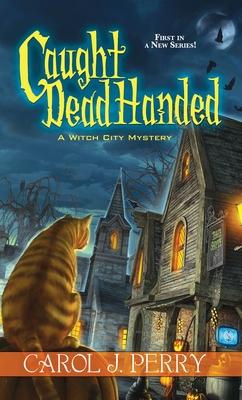 She's not a psychic--she just plays one on TV.

Most folks associate the city of Salem, Massachusetts with witches, but for Lee Barrett, it's home. This October she's returned to her hometown--where her beloved Aunt Ibby still lives--to interview for a job as a reporter at WICH-TV. But the only opening is for a call-in psychic to host the late night horror movies. It seems the previous host, Ariel Constellation, never saw her own murder coming.

Lee reluctantly takes the job, but when she starts seeing real events in the obsidian ball she's using as a prop, she wonders if she might really have psychic abilities. To make things even spookier, it's starting to look like Ariel may have been an actual practicing witch--especially when O'Ryan, the cat Lee and Aunt Ibby inherited from her, exhibits some strange powers of his own. With Halloween fast approaching, Lee must focus on unmasking a killer--or her career as a psychic may be very short lived. . .

Carol J. Perry was born in Salem on Halloween Eve. She has written many young adult novels, and is also the author of the Witch City mystery series. She and her husband Dan live in the Tampa Bay area of Florida with a cat and a black Lab. Visit her at www.caroljperry.com.
Loading...
or
Not Currently Available for Direct Purchase