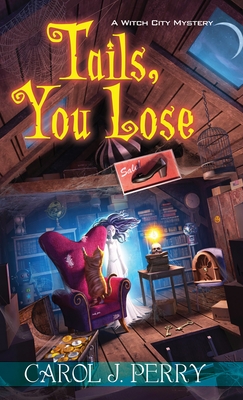 Her instincts may be killer--but can she catch one this wicked?

After losing her job as a TV psychic, Lee Barrett has decided to volunteer her talents as an instructor at the Tabitha Trumbull Academy of the Arts--known as "The Tabby"--in her hometown of Salem, Massachusetts. But when the school's handyman turns up dead under seemingly inexplicable circumstances on Christmas night, Lee's clairvoyant capabilities begin bubbling to the surface once again.

The Tabby is housed in the long-vacant Trumbull's Department Store. As Lee and her intrepid students begin work on a documentary charting the store's history, they unravel a century of family secrets, deathbed whispers--and a mysterious labyrinth of tunnels hidden right below the streets of Salem. Even the witches in town are spooked, and when Lee begins seeing visions in the large black patent leather pump in her classroom, she's certain something evil is afoot. But ghosts in the store's attic are the least of her worries with a killer on the loose. . .

Carol J. Perry was born in Salem on Halloween Eve. She has written many young adult novels, and is also the author of the Witch City mystery series. She and her husband Dan live in the Tampa Bay area of Florida with a cat and a black Lab. Visit her at www.caroljperry.com.
Loading...
or support indie stores by buying on