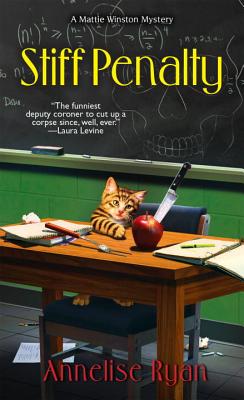 Deputy coroner Mattie Winston knows a thing or two about dead bodies. That's why she's on the case of Derrick Ames, a high school math teacher stabbed to death with a barbecue fork straight to the heart. Sure, she's turned up some motives and a few suspects, but nothing adds up. Especially when the evidence points to Ames's teenage son. Newly pregnant Mattie can't believe it, even as her own long-estranged father may be following her. But one thing's certain, she'd better start figuring things out fast, or a deadly perpetrator could be subtracting two more victims from the population of Sorenson, Wisconsin. . .

Annelise Ryan is the pseudonym for the author of three suspense novels. She has written more than 200 published articles, worked as a book reviewer for Barnes & Noble, and is an active member of Mystery Writers of America and International Thriller Writers. She is an RN whose past work experience has included everything from birth (obstetrics) to death (hospice). She currently works in an ER and enjoys a number of side hobbies, including competitive Scrabble, stained glass, scuba diving, and gardening.

"The funniest deputy coroner to cut up a corpse since, well, ever." --Laura Levine

"A puzzler of a mystery. What a thrill ride!" --Jenn McKinlay

"Has it all: suspense, laughter, a spicy dash of romance..." --Tess Gerritsen