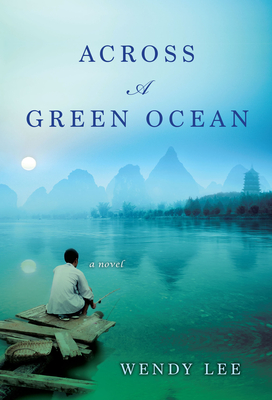 Across a Green Ocean

Michael Tang and his sister, Emily, have both struggled to forge a sense of identity in their parents' adopted homeland. Emily, an immigration lawyer in New York City, baffles their mother, Ling, by refusing to have children. At twenty-six, Michael is unable to commit to a relationship or a career--or come out to his family. And now their father, after a lifetime of sacrifice, has passed away.

When Michael finds a letter to his father from a long-ago friend, he impulsively travels to China in the hopes of learning more about a man he never really knew. In this rapidly modernizing country he begins to understand his father's decisions, including one that reverberates into the present day. Meanwhile, on the other side of the world, Ling and Emily question their own choices, trying to forge a path that bends toward new loves and fresh beginnings.

Along the whitewashed mud walls are large Chinese characters written in red, sometimes ending with an exclamation point. They look as if they are out of another time period, probably some kind of propaganda. Go back! Michael imagines them saying, in a private message just for him. This is a mistake! You won't find what you're looking for!

What, or rather who, Michael is hoping to find at the end of his trip is a man named Liao Weishu. This is the name that is signed at the end of a letter that Michael discovered among his father's things after the funeral. Then his mother had come into the room, and he had put the letter in his pants pocket, where it stayed unopened for another nine months. Sometimes he would think about it, and be satisfied enough to simply know it was there.

The postmark indicated it had been sent about a month before his father's death, from someplace in China that he had never heard of and didn't think he knew how to pronounce. Unfortunately, it was written in Chinese, except for one sentence toward the end of the letter--Everything has been forgiven.

Wendy Lee is the author of the novels Across a Green Ocean and Happy Family, which was named one of the top ten debuts of 2008 by Booklist and received an honorable mention from the Association of Asian American Studies. A graduate of New York University’s Creative Writing Program, she has worked as a book editor and an English teacher in China. She lives in Queens, New York.

Ling is afraid that her children’s relationship is doomed to “older sibling–younger sibling rivalry or worse, indifference.” What kind of siblings are Emily and Michael? Is Emily a good older sister to her brother? How has their relationship changed over the years?

Describe Emily and Julian’s marriage. Do they have more issues other than the fact that Julian wants children and Emily doesn’t? In explaining their marital problems, Emily says, “We’ve never had to struggle for anything together, against anything, except our parents’ expectations . . . and that’s not enough to keep two people together.” What part does this play in the dissolution of their marriage?

Michael is constantly testing his relationship with David, from going on a trip without telling him to almost cheating on him. Why does Michael feel the need to push these boundaries? Will Michael and David’s relationship last?

How does Gao Hu remind Emily of her own father? Why did she become an immigration lawyer, and how much of it has to do with her parents? Are these good reasons to pursue a career?

In considering her husband, Ling reflects that she knows “how delicate his stomach was; how loud his snores at night; how his discarded socks looked like cow dung. . . . If knowing the most intimate details of someone’s life wasn’t really knowing that person, then what was?” Does knowing these kinds of things about someone mean that you truly know them? How is this different from understanding someone, particularly a spouse?

While visiting Liao’s home, Michael thinks that maybe Liao, rather than his own father, is the lucky one. Even though he spent fifteen years in a labor camp and Han immigrated to America, what does Liao have in his life that Han did not? What do people lose through the immigration process?

How does Liao’s story help Michael forgive his father? Do you believe the saying that “holding on to your anger is like holding on to a piece of live coal that you intend to throw at someone else; in the end, you are the one who is burned”? Is there an instance in your life when you found it difficult to forgive someone?

David tells Emily that “what you’re so sure of when you’re eighteen can change. Or when you’re twenty-eight or thirty-eight.” Do you agree? What personal beliefs change over time and what don’t? Was there something you believed in when you were young that changed over time?

In a sense, Han Tang will always remain an enigmatic person to his wife and children. What kind of closure do they find on their own? How does this help them continue with their lives?

A reason many people immigrate to another country is to make a better life for their children. To many immigrants, this “better life” means traditional spouses, children, and job security—none of which Emily or Michael have by the end of the novel. Is this a betrayal of their parents’ sacrifices? What do the children of immigrants owe their parents?