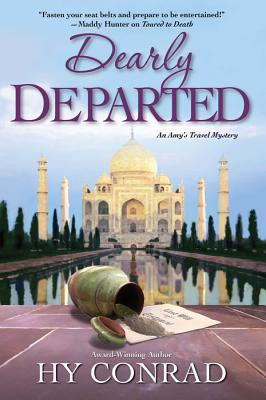 "Fasten your seat belts and prepare to be entertained!" --Maddy Hunter on Toured to Death

Fanny and Amy Abel, the dynamic mother-and-daughter owners of a NYC travel agency, have just booked their biggest trip yet. But with danger in the air, the itinerary may include murder...

Paisley MacGregor, a maid to the rich, made a dying request to send all of her wealthy employers on a first-class wake to spread her ashes around the world. Amy has her suspicions about these "mourners," especially when one has a life-threatening "accident" at the first stop in Paris. And when a mysterious American stranger tagging along with the group has his ticket punched in the shadow of the Taj Mahal, Amy knows she may have a killer on her tour.

Who was this stranger, and what's the connection to someone in her group? Digging for clues while continuing on with the trip is a lot for Amy to manage, especially when another mourner has a possibly fatal encounter with a Hawaiian volcano. Back in the States, Fanny and Amy start to piece together a secret worth killing for, but someone is hot on their trail, and ready to send them on a one-way trip--to the morgue!

Hy Conrad has made a career out of mystery, earning a Scribe Award and garnering three Edgar nominations, while developing a horde of popular games and interactive films, hundreds of stories, and a dozen books of short mysteries. In the world of TV, he is best known for his eight seasons as a writer and co-executive producer for the ground-breaking series Monk.

The Amy's Travel Mystery series, which began with Toured to Death, has given Hy the chance to combine a mystery career with his love of travel, which started with a European tour in high school and now includes seventy countries, not counting airport layovers. He also loves listening to other people's travel stories, as long as they realize it might all end up in a book.

When not killing people or checking luggage, Hy splits his time between Key West and Vermont. No matter where he is, he can be found on his website, hyconrad.com.
Loading...
or
Not Currently Available for Direct Purchase