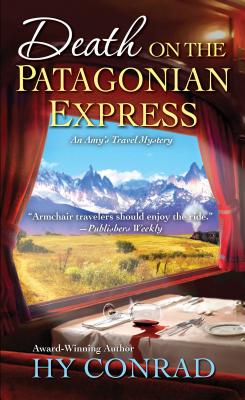 Death on the Patagonian Express (An Amy's Travel Mystery #3)

Upon the breakout success of their travel agency blog, TrippyGirl, Amy Abel and her mother, Fanny, are asked to join a group of prominent travel writers on a scenic train tour of Patagonia. Their expedition seems to chug along smoothly until Fanny finds a body scavenged by condors in the wilderness. Even more unsettling, the corpse mysteriously disappears before fellow tourists arrive. Some question Fanny’s sanity, but doubt becomes horror when the tour owner’s angel investor is found dead in a similar position. As a number of “accidents” validate Amy’s suspicion of foul play, the Abels must outsmart one very conniving killer—or they’ll soon be en route to their final destination . . .

“The mother/daughter sleuths are witty and quirky, and reminiscent of Miss Marple.”
—RT Book Reviews, 4 Stars on Death on the Patagonian Express

“An absolutely wonderful mystery, served just the way I like it—with heart and humor.”
—Tony Shalhoub, star of TV’s Monk on Toured to Death

HY CONRAD has made a career out of mystery, earning a Scribe Award and garnering three Edgar nominations, while developing a horde of popular games and interactive films, hundreds of stories, and a dozen books of short mysteries. In the world of TV, he is best known for his eight seasons as a writer and co-executive producer for the groundbreaking series Monk.

The Amy’s Travel Mystery series has given Hy the chance to combine a mystery career with his love of travel, which started with a European tour in high school and now includes seventy countries, not counting airport layovers. He also loves listening to other people’s travel stories, as long as they realize it might all end up in a book.

When not killing people or checking luggage, Hy splits his time between Key West and Vermont. No matter where he is, he can be found on his website, hyconrad.com.
Loading...
or
Not Currently Available for Direct Purchase