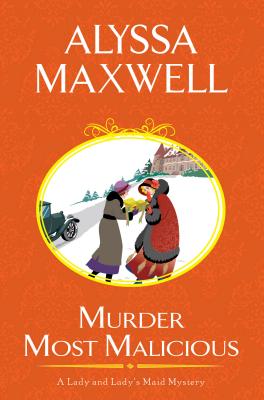 Murder Most Malicious (A Lady and Lady's Maid Mystery #1)

In post-World War I England, Lady Phoebe Renshaw and her lady’s maid, Eva Huntford, step outside of their social roles and put their lives at risk to apprehend a vicious killer . . .

As a difficult 1918 draws to a close, there is much to celebrate for nineteen-year-old Phoebe Renshaw and her three siblings at their beloved family estate of Foxwood Hall. The dreadful war is finally over; eldest daughter Julia’s engagement to their houseguest, the Marquis of Allerton, appears imminent; and all have gathered to enjoy peace on earth, good will toward men.

But on the morning of Boxing Day, the Marquis goes missing. Not entirely missing, however, as macabre evidence of foul play turns up in gift boxes given to lady’s maid Eva Huntford and a handful of others. As the local constable suspects a footman at Foxwood Hall, Phoebe and Eva follow the clues to a different conclusion. But both young women will need to think outside the box to wrap up this case—before a cornered killer lashes out with ill will toward them . . .

“Entertaining . . . the characters and scenes are highly reminiscent of TV’s Downton Abbey, but Maxwell makes Phoebe and Eva distinctive personalities in their own right.” —Publishers Weekly

Alyssa Maxwell has worked in publishing as an assistant editor and a ghost writer, but knew from an early age that being a novelist was what she wanted most. Growing up in New England and traveling to Great Britain fueled a passion for history, while a love of puzzles of all kinds drew her to the mystery genre. She lives in South Florida in the current year, but confesses to spending most of her time in the Victorian, Edwardian, and post WWI eras. In addition to fantasizing about wearing Worth gowns while strolling manor house gardens, she loves to watch BBC and other period productions and sip tea in the afternoons. You can learn more about Alyssa and her books at www.alyssamaxwell.com, and friend her on Facebook at https://www.facebook.com/gildednewport and https://www.facebook.com/alyssa.maxwell.750.
Loading...
or support indie stores by buying on