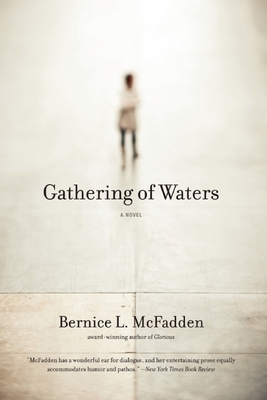 One of Essence's Best Books of the Decade

Gathering of Waters has been selected as a Go On Girl April 2013 Book Pick.

"McFadden works a kind of miracle--not only do her characters] retain their appealing humanity; their story eclipses the bonds of history to offer continuous surprises...Beautiful and evocative, Gathering of Waters brings three generations to life...The real power of the narrative lies in the richness and complexity of the characters. While they inhabit these pages they live, and they do so gloriously and messily and magically, so that we are at last sorry to see them go, and we sit with those small moments we had with them and worry over them, enchanted, until they become something like our own memories, dimmed by time, but alive with the ghosts of the past, and burning with spirits."
--Jesmyn Ward, New York Times Book Review, Editors' Choice

"Read it aloud. Hire a chorus to chant it to you and anyone else interested in hearing about civil rights and uncivil desires, about the dark heat of hate, about the force of forgiveness."
--Alan Cheuse, All Things Considered, NPR

"McFadden combines events of Biblical proportions--from flooding to resurrection--with history to create a cautionary, redemptive tale that spans the early twentieth century to the start of Hurricane Katrina. She compellingly invites readers to consider the distinctions between 'truth or fantasy'...In McFadden's boldly spun yarn, consequences extend across time and place. This is an arresting historical portrait of Southern life with reimagined outcomes, suggesting that hope in the enduring power of memory can offer healing where justice does not suffice."
--Publishers Weekly

"The rich text is shaped by the African American storytelling tradition and layered with significant American histories. Recalling the woven spirituality of Toni Morrison's Beloved, this work will appeal to readers of mystic literature."
--Library Journal

"McFadden makes powerful use of imagery in this fantastical novel of ever-flowing waters and troubled spirits."
--Booklist

"In this fierce reimagining, the actual town of Money, MS narrates the story about the ghost of Emmett Till and his from-the-other-side reunification with the girl he loved as a child in Gathering of Waters by Bernice L. McFadden."
--Ebony Magazine

Gathering of Waters is a deeply engrossing tale narrated by the town of Money, Mississippi--a site both significant and infamous in our collective story as a nation. Money is personified in this haunting story, which chronicles its troubled history following the arrival of the Hilson and Bryant families.

Tass Hilson and Emmett Till were young and in love when Emmett was brutally murdered in 1955. Anxious to escape the town, Tass marries Maximillian May and relocates to Detroit.

Forty years later, after the death of her husband, Tass returns to Money and fantasy takes flesh when Emmett Till's spirit is finally released from the dank, dark waters of the Tallahatchie River. The two lovers are reunited, bringing the story to an enchanting and profound conclusion.

Gathering of Waters mines the truth about Money, Mississippi, as well as the town's families, and threads their history over decades. The bare-bones realism--both disturbing and riveting--combined with a magical realm in which ghosts have the final say, is reminiscent of Toni Morrison's Beloved.

Bernice L. McFadden is the author of seven critically acclaimed novels including the classic "Sugar" and "Glorious, " which was featured in "O, The Oprah Magazine, " selected as the debut title for the One Book, One Harlem program, and was a finalist for the NAACP Image Award. She is a two-time Hurston/Wright Legacy Award finalist, as well as the recipient of two fiction honor awards from the BCALA. Her sophomore novel, "The Warmest December, " was praised by Nobel Prize-winning author Toni Morrison as "searing and expertly imagined." McFadden lives in Brooklyn, New York.
Loading...
or support indie stores by buying on