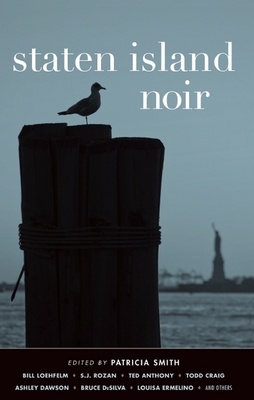 "When They Are Done with Us" by Patricia Smith was selected for inclusion in The Best American Mystery Stories 2013, edited by Otto Penzler and Lisa Scottoline Brand-new stories by: Bill Loehfelm, S.J. Rozan, Ted Anthony, Todd Craig, Ashley Dawson, Bruce DeSilva, Louisa Ermelino, Binnie Kirshenbaum, Michael Largo, Mike Penncavage, Linda Nieves-Powell, Patricia Smith, Shay Youngblood, and Edward Joyce. Staten Island, the last of New York City's five boroughs to enter Akashic's noir series, severs as the setting for this exceptionally strong anthology.
--Publishers Weekly (starred review) Smith's introduction is a revelation. She knows the Island I have in my head. It was like finding a literary sibling, separated since birth.
--Washington Independent It's not enough for noir to be dark. It's got to be bad-ass. Its words, its decaying and horrible beauty have got to hit you like a spiked heel dragged from your guts to your gullet. It's got to twist the hot knife of passion in that soft space right below your belly while pumping bullets into your heart. It's got to make you bleed. Akashic Books' latest in their noir series, Staten Island Noir features some dusky and drop-dead gorgeous gems (emphasis on the dead) that do just that.
--Grub Street Daily Staten Island is the forgotten borough, lacking a subway system, left out of Jay-Z's songs, known for organized crime, bad accents, fake tans, and garbage--which makes it a rich setting for Akashic's noir series...In a thrilling tilt-a-whirl of crime and drama, editor Patricia Smith has carefully chosen writers concerned with the true nature of the small suburban borough.
--Electric Literature's The Outlet Each story in this enjoyable collection has its own charms, if the words 'enjoyable' or 'charms' can be used with these dark tales, and each can stand-alone. However, if, like me, you had always looked at Staten Island as banal and benign, by the book's end your ideas will be forever changed.
--ReviewingTheEvidence.com Patricia Smith, editor of Staten Island Noir, has won the Robert L. Fish Memorial Award for her short story included in the anthology, "When They Are Done with Us."

Patricia Smith is the author of six acclaimed poetry volumes, including Blood Dazzler, a finalist for the 2008 National Book Award, and Teahouse of the Almighty, a National Poetry Series selection. Her work has been published in the 2011 editions of both Best American Poetry and Best American Essays. In addition to her poetic works, Smith is also the author of Africans in America, a companion volume to the groundbreaking PBS documentary. She is currently a professor at the City University of New York's College of Staten Island, and serves on the faculties of Cave Canem and the MFA programs at Stonecoast/University of Southern Maine and Sierra Nevada College.
Loading...
or support indie stores by buying on