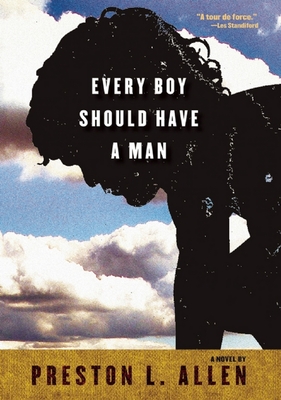 Every Boy Should Have a Man

Nominated for the 2014 Hurston/Wright Legacy Award in Fiction A Chicago Tribune Noteworthy Fiction Pick for 2013 Allen's concise book's power lies within its understated irony, never more heavy-handed than a preacher's admonition that 'a world without mans is a world without us all.' The plain narrative and relationship between boy and female man, rounded out with humor and occasional (sometimes literal) bite, promises to be a sleeper favorite among speculative audiences.
--Publishers Weekly Allen...throws caution to the wind with his bizarre but exquisitely composed fable that uses transhumanism as the prism to reflect on the nature of humanity...It's also intellectually curious and rather cutting in many of its conceptual and cultural assessments. It's a world where man is not only pet, but also meat, where religion, wars and empires are just as backward as they are in our own world, and where worlds collide with a temperamental angst that is as uncomfortable as it is alluring. Much like Pierre Boulle's 1963 novel Planet of the Apes, this novel is a sardonic parable on the nature and destiny of the species. A nimble fable whose bold narrative experiment is elevated by its near-biblical language and affectionate embrace of our inherent flaws.
--Kirkus Reviews An imaginative and honest epic, weaving together biblical stories, fantasy, poetry, and fairy tales with a touch of realism...Allen asks us to question the assumptions, -isms, and contradictions of the modern world...Recalling the humanitarian concerns of Octavia Butler's Fledgling and the poetry of Ovid's Metamorphosis, this book will appeal to readers of literary fiction and fantasy.
--Library Journal Imaginative, versatile, and daring Allen (Jesus Boy, 2010) raids the realms of myth and fairy tales in this topsy-turvy speculative fable....With canny improvisations on 'Jack and the Beanstalk, ' the 'Epic of Gilgamesh, ' and Alice in Wonderland, Allen sharpens our perceptions of class divides, racism, enslavement, and abrupt and devastating climate change to create a delectably adventurous, wily, funny, and wise cautionary parable.
--Booklist There's no doubt this is an original story and one you should read.
--Book Sp(l)ot Reviews From this point forward, readers consulting any reference work addressing the concept of tour de force will find there a citation of Preston L. Allen's Every Boy Should Have a Man. It is one thing to devise a fable dealing so adroitly with such concepts as racism, war, religion, and the very nature of civilization itself, but Preston's true triumph is the infusion of each page and every astonishing episode with palpable emotional resonance.
--Les Standiford, author of Desperate Sons A riveting, poignant satire of societal ills with an added dose of fantasy, Every Boy Should Have a Man takes place in a post-human world where creatures called oafs keep humanlike mans as beloved pets. One day, a poor boy oaf brings home a man whom he hides under his bed in the hopes his parents won't find out. With echoes of Margaret Atwood and Jack and the Beanstalk, Jonathan Swift's Gulliver's Travels and Octavia Butler's Kindred, this is a picaresque journey into uncharted territory in earth, sky, and firmament. Oafs and mans each gain insight and understanding into one another's worlds, and the worlds that touch theirs--ultimately showing that oafs and mans alike share a common humanity. Filled with surprising twists and turns, the novel is in part a morality tale that takes on many of today's issues, including poverty, the environment, sexism, racism, war, and religion, all in lighthearted King James prose.

Preston L. Allen is a recipient of a State of Florida Individual Artist Fellowship and a winner of the Sonja H. Stone Prize in Fiction. He is the author of Jesus Boy, the critically-acclaimed novel All or Nothing, and the award-winning collection Churchboys and Other Sinners. His stories have appeared in numerous magazines and journals and have been anthologized in Brown Sugar and other publications. He teaches writing in south Florida.
Loading...
or support indie stores by buying on