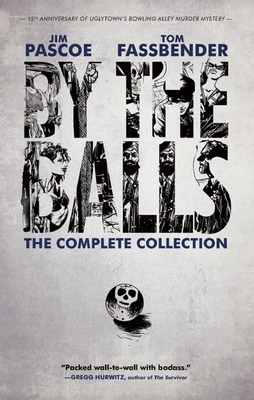 Readers who enjoy their hard-boiled detective fiction seasoned with self-referential humor will welcome this collection, which includes two new short stories by Pascoe and Fassbender, cofounders of the publisher UglyTown...The title work, a novel first published in 1998, is the highpoint, as a murder in a bowling alley claims the life of Gentleman Joe Biggs, the city's leading bowler. Along the way to a crafty solution, the authors wink at the readers ('It was Suzi who made a passing joke about this being a detective story, and as it goes in all good detective stories, it was now time to stake out the widow's house to see what might develop')--a light touch that leavens a grim fictional universe.
--Publishers Weekly (review) By The Balls...not only launched a series of Ben Drake stories and novels but also put UglyTown on the map as a quirky but serious indie house focused on handsomely designed trade paperback editions and hardboiled crime fiction with a strong sense of place.
--Publishers Weekly (feature) By the Balls is manna from heaven for aficionados of noir and lovers of the classics from older masters of the genre such as Hammett, Chandler, and Cain. The stories are fast with page-turning addictiveness, filled with gems of street-smart dialogue and characters to kill for. Numerous illustrations by Paul Pope adorn the inner pages, all of which are stark and beautifully rendered. And just when you think it can't get any better, over 20 short essays by industry luminaries are thrown in for good measure. Noir collections don't get much better than this.
--New York Journal of Books With their tongues well placed in their pulpy cheeks, these stories could be read as fairly faithful homages to the classic mystery noirs of the 1930s (and '40s, and '50s) as well as wickedly playful satires...A definitive package of noir throwbacks that will tickle your fancy if you're a fan of Hammet, Spillane and Chandler.
--Shelf Awareness This deluxe volume assembles all the early writing of Jim Pascoe and Tom Fassbender in a redesigned fifteenth anniversary edition, including the two underground cult-classic novels By the Balls and Five Shots and a Funeral, along with two brand-new short stories, a new introduction, and over a dozen short essays by industry luminaries. Perfect for fans of Dashiell Hammett and Raymond Chandler, these tales follow the exploits of Ben Drake, a detective with a passion for small cigars and big fights, a love of Old Grand-Dad, and a weakness for women in trouble. North of Las Vegas in the fictional town of Testacy City, Drake sniffs out killers, thieves, kidnappers, cock fighters, double crossers, crooked cops, and numbers runners--all culminating in the bizarre murder of Gentleman Joe Biggs, a well-loved local bowling hero. As he continues to crack clues in the case, Drake is drawn deeper into a citywide criminal conspiracy. Jim Pascoe is a writer, designer, and an Emmy Award-winning creative director. He is responsible for the packaging design of over one hundred DVDs, such as Mad Men and the 2010 Stanley Kubrick Collection. He has written comics and books featuring Buffy the Vampire Slayer, Kim Possible, and Hellboy. His graphic novel series Undertown was serialized in over fifty newspapers worldwide, and his recent crime fiction has appeared in Los Angeles Noir and Florida Heat Wave. Tom Fassbender is a writer, editor, and content strategist who has written, edited, and published both novels and comics. He lives in Los Angeles, California.

Jim Pascoe: Jim Pascoe is a writer, designer, and a multiple-award-winning creative director. He produced and designed the interactive TV game JETIX Cards Live, which won an Emmy Award in 2004, and he's responsible for the packaging design of over 100 DVDs, such as MAD MEN, the 2010 KUBRICK COLLECTION, and CORALINE, which won Best in Show at The Hollywood Reporter's Key Art Awards. Still, his primary passion remains writing. He's written comics and books featuring Buffy the Vampire Slayer, Kim Possible, and Hellboy. His graphic novel series UNDERTOWN was serialized in over 50 newspapers worldwide. And his recent crime fiction has appeared in LOS ANGELES NOIR (The Kidnapper Bell) and FLORIDA HEAT WAVE (Paper).Tom Fassbender: Tom Fassbender is a writer, editor, and content strategist who has written, edited, and published both novels and comics. By day he manages the creative team at a Southern California financial institution. He fills the rest of his time by being a father, tending beehives, running long distances (preferably in the Angeles National Forest), and seeking new adventures in and around Los Angeles.
Loading...
or support indie stores by buying on