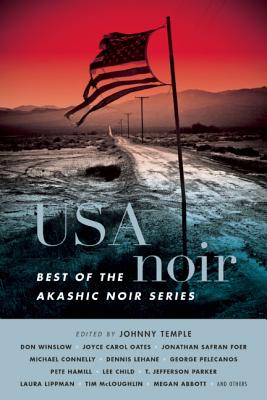 "New York Times" Editors' Choice
Indie Books Roundup #1 Pick, Barnes & Noble Book Blog
One of "100 Best Books for Readers Young and Old," HispanicBusiness.com
"Readers will be hard put to find a better collection of short stories in any genre."
--"Publishers Weekly" (starred review)
"A must read for mystery fans, not just devotees of Akashic's 'Noir' series, this anthology serves as both an introduction for newcomers and a greatest-hits package for regular readers of the series... There isn't a weak story in the collection...Strongly recommended for readers who enjoy mysteries published by Hard Case Crime, as well as for fans of police procedurals."
--"Library Journal" (starred review)
"The 37 stories in this collection represent the best of the U.S.-based anthologies, and the list of contributors include virtually anyone who's made the best-seller list with a work of crime fiction in the last decade...a must-have anthology."
--"Booklist" (starred review)
"It's hard to imagine how the present anthology could be topped for sheer marquee appeal...Perhaps the single most impressive feature of the collection is its range of voices, from Joyce Carol Oates' faux innocent young family to Megan Abbott's impressionable high school kids to the chorus of peremptory voices S.J. Rozan plants in a haunted thief's head. Eat your heart out, Walt Whitman: These are the folks who hear America singing, and moaning and screaming."
--"Kirkus Reviews"
"All the heavy hitters...came out for "USA Noir."..an important anthology of stories shrewdly culled by Johnny Temple."
--"New York Times Book Review" (Editor's Choice)
"This is, without question, a must-have collection that serves equally well as an introduction to each of the authors as it does the Noir series itself. Regardless if you read the stories in the order presented, or go directly to those by some of your favorites, you'll find "USA Noir" on your nightstand or reading table for many nights."
--"Bookgasm"
"So, thanks a million to antho editor and Akashic Books head honcho Johnny Temple for doing such a crackerjack job of overloading my schedule with these dark and dirty pleasures."
--"Austin Chronicle"
"For Christmas, someone could give me "USA Noir: Best of the Akashic Noir Series"--a good way to offset all the goodwill and frivolity."
--"The Observer" (UK), a Book of the Year
"For those who prefer their crime closer to home, there is "USA Noir," a veritable greatest hits of Akashic's long-running, acclaimed noir anthology series, rounding up solid gold blackness of the bleakest and darkest kind...Like Chuck Berry sang, 'Anything you want, we got right here in the USA.'"
--"Mystery Scene Magazine"
Contributors include: Dennis Lehane, Don Winslow, Michael Connelly, George Pelecanos, Susan Straight, Jonathan Safran Foer, Laura Lippman, Pete Hamill, Joyce Carol Oates, Lee Child, T. Jefferson Parker, Lawrence Block, Terrance Hayes, Jerome Charyn, Jeffery Deaver, Maggie Estep, Bayo Ojikutu, Tim McLoughlin, Barbara DeMarco-Barrett, Reed Farrel Coleman, Megan Abbott, Elyssa East, James W. Hall, J. Malcolm Garcia, Julie Smith, Joseph Bruchac, Pir Rothenberg, Luis Alberto Urrea, Domenic Stansberry, John O'Brien, S.J. Rozan, Asali Solomon, William Kent Krueger, Tim Broderick, Bharti Kirchner, Karen Karbo, and Lisa Sandlin.
Launched with the summer 2004 award-winning bestseller "Brooklyn Noir," the groundbreaking Akashic Noir series now includes over sixty volumes and counting. Each book is comprised of all-new stories, each one set in a distinct location within the city or region of the book. This is the first "best of" volume and it powerfully conveys what the series has accomplished.

Johnny Temple is the publisher and editor-in-chief of Akashic Books, an award-winning Brooklyn-based independent company dedicated to publishing urban literary fiction and political nonfiction. He won the 2013 Ellery Queen Award, the American Association of Publishers' 2005 Miriam Bass Award for Creativity in Independent Publishing; and the 2010 Jay and Dean Kogan Award for Excellence in Noir Literature. Temple teaches courses on the publishing business at Wilkes University and Wesleyan University; and is the Chair of the Brooklyn Literary Council, which works with Brooklyn's borough president to plan the annual Brooklyn Book Festival. He also plays bass guitar in the band Girls Against Boys, which has toured extensively across the globe and released numerous albums on independent and major record companies. He has contributed articles and political essays to various publications, including "The Nation," "Publishers Weekly," "AlterNet," "Poets & Writers," and "BookForum."
or
Buy Here
(This book is on backorder)
Copyright © 2020 American Booksellers Association