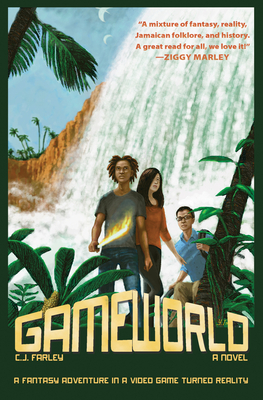 The Narnia for the Social Media Generation.
--The Wall Street Journal

By the time of Farley's Game World, gaming had gone digital, and while his book is more fantasy-adventure than puzzle-mystery, there are parallels worthy of discussion, from the nature of the games to the depictions of disabled.
--Booklist, included in Conversation Starters: Recontextualizing the Classics

Drawn from both video gaming culture and the rich tapestry of Jamaican myth and folklore, blending pointed social satire and mystical philosophy, this exuberant, original hero's journey is a real trip...Exhilarating, thought-provoking and one of a kind.
--Kirkus Reviews

Adult author/Wall Street Journal editor Farley's middle-grade debut draws from Jamaican mythology and beliefs, as well as from other cultures, to weave a fast-paced, whimsical mixture of magic and action...the setting lends itself well to memorable imagery and a fun experience.
--Publishers Weekly

Farley blends video gaming and Jamaican folklore in this intense, fast-paced middle-grade fantasy that is sure to quickly grab readers.
--Booklist

Game World is unique in that its fantasy world, as its name suggests, is built upon characters and stories from actual Jamaican folklore.
--Philadelphia Review of Books

One of This Spring's Hottest Teen Books, Huffington Post

I found it very hard to set down this excellent novel and do something else without thinking about it....I highly recommend his book to fans of fantasy. Because you will love it
--Middle Shelf (reviewed by Teak, age 13)

Farley writes in a straightforward way that is both accessible to younger readers but still interesting to adults.
--Persephone Magazine

In his metaphorical world, Farley spares neither the dubious machinations of high finance nor the heartbreak of an orphan.
--Center for Fiction

I highly recommend Game World for kids in 4th-12th grade. Parents can read it too and love the characters and story just as much as the kids.
--The Family Coach

Dylan Rudee's life is an epic fail. He's bullied at school and the aunt who has raised him since he was orphaned as a child just lost her job and their apartment. Dylan's one chance to help his family is the only thing he's good at: video games. The multibillion-dollar company Mee Corp. has announced a televised tournament to find the Game-Changers: the forty-four kids who are the best in the world at playing Xamaica, a role-playing fantasy game that's sweeping the planet. If Dylan can win the top prize, he just might be able to change his life.

It turns out that Dylan is the greatest gamer anyone has ever seen, and his skills unlock a real-life fantasy world inside the game. Now actual monsters are trying to kill him, and he is swept up into an adventure along with his too-tall genius sister Emma, his hacker best friend Eli, and Ines Mee, the privileged daughter of Mee Corp.'s mysterious CEO and chief inventor. Along the way they encounter Nestuh, a giant spider who can spin a story but not a web; Baron Zonip, a hummingbird king who rules a wildly wealthy treetop kingdom; and an enchantress named Nanni who, with her shadow army, may be bent on conquering Xamaica and stealing its magic.

In order to save his sister and his friends, Dylan must solve a dangerous mystery in three days and uncover secrets about Xamaica, his family, and himself. But will he discover his hidden powers before two worlds--Xamaica and Earth--are completely destroyed?

C.J. Farley was born in Kingston, Jamaicam and grew up in Brockport, NY, with stops in Middle-earth, Xanth, Earthsea, and Narnia. Farley's biography Aaliyah: More Than a Woman was a national best seller. A former editor of the Harvard Lampoon and a former music critic for Time, Farley is a blogger, columnist, and senior editor at the Wall Street Journal. Game World is Farley's first novel for young readers.
Loading...
or support indie stores by buying on