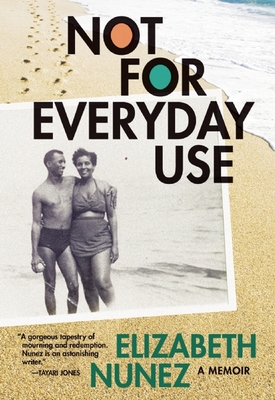 Not for Everyday Use

Winner of the 2015 Hurston/Wright Legacy Award in Nonfiction Longlisted for the 2015 OCM Bocas Prize in Nonfiction One of Oprah.com's Best Memoirs of the Year One of The Skanner's Best Black Books of 2014 One of Oprah.com's Memoirs Too Powerful to Put Down Nunez ponders the cultural, racial, familial, social, and personal experiences that led to what she ultimately understands was a deeply loving union between her parents. A beautifully written exploration of the complexities of marriage and family life.
--Booklist (starred review) Through her thoughtful and articulate writing, Nunez offers a valuable perspective on the racism that she experienced, even in America, and the damage the Catholic Church does to women who follow the 'no artificial birth control' rule. Recommended for memoir enthusiasts and readers interested in Caribbean literature.
--Library Journal An intriguing...courageous memoir.
--Kirkus Reviews A narrative that feels like a close friend talking about her past...An insightful, generous story.
--Oprah.com Nunez reflects on her mother's legacy as she works through her grief, and demonstrates mastery of her craft.
--Huffington Post A powerful memoir...this non-fiction narrative pulls the curtain back upon the Caribbean woman known as writer, mother, sister and wife...Definitely peruse how this writer's narrative plays out.
--Ebony Self-effacing and honest, Nunez gives listeners a unique window onto a foreign world.
--AudioFile Magazine, Earphones Award Review of audiobook edition narrated by Elizabeth Nunez A celebration of understanding and empathy.
--Chicago Center for Literature and Photography When a writer like Elizabeth Nunez, who has spent her career unraveling the romances we tell ourselves about our native Caribbean, migrates from the novel to the memoir, readers are eager to discover what boundaries of both genre and familial privacy she will disrupt. Not for Everyday Use is a loving disruption. Through the prism of her parents' enviable marriage--more than half a century--Nunez intimately explores a changing colonial landscape and attitudes about race, reproduction, and the meaning of family.
--Review: Literature of the Arts of the Americas no. 91 Readers and writers of US ethnic literatures will find Nunez' voicing of immigrant sentiments familiar, eloquent, and distinctive.
--La Bloga I loved Not for Everyday Use by Elizabeth Nunez...a must read.
--Carry On Friends A sensitive memoir...The Caribbean is home for many excellent writers, and Elizabeth Nunez is one of the best.
--Me, You, and Books Tracing the four days from the moment she gets the call that every immigrant fears to the burial of her mother, Elizabeth Nunez tells the haunting story of her lifelong struggle to cope with the consequences of the sterner stuff of her parents' ambitions for their children and her mother's seemingly unbreakable conviction that displays of affection are not for everyday use. But Nunez sympathizes with her parents, whose happiness is constrained by the oppressive strictures of colonialism, by the Catholic Church's prohibition of artificial birth control which her mother obeys, terrified by the threat of eternal damnation (her mother gets pregnant fourteen times: nine live births and five miscarriages which almost kill her), and by what Malcolm Gladwell refers to as the privilege of skin color in his mother's Caribbean island homeland where the brown-skinned classes...came to fetishize their lightness. Still, a fierce love holds this family together, and the passionate, though complex, love Nunez's parents have for each other will remind readers of the passion between the aging lovers in Gabriel Garc a M rquez's Love in the Time of Cholera. Written in exquisite prose by a writer the New York Times Book Review calls a master at pacing and plotting, Not for Everyday Use is a page-turner that readers will find impossible to put down.