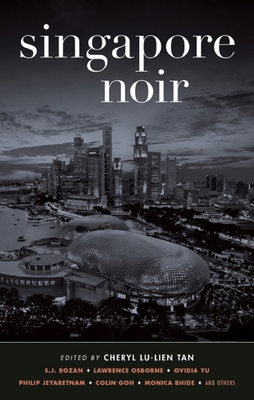 Suchen Christine Lim's story Mei Kwei, I Love You has been named a finalist for the Private Eye Writers of America Shamus Award for Best P.I. Short Story Singapore Noir has been nominated for a Popular Bookstore Reader's Choice Award Singapore, with its great wealth and great poverty existing amid ethnic, linguistic, and cultural tensions, offers fertile ground for bleak fiction, as shown by the 14 tales in this solid Akashic noir anthology...Tan has assembled a strong lineup of Singapore natives and knowledgeable visitors for this volume exploring the dark side of a fascinating country.
--Publishers Weekly Singapore Noir is the latest in Akashic's long-running and globetrotting Noir series, giving plenty of new and unfamiliar voices a chance to shine.
--San Francisco Book Review Singapore Noir is another fine addition to the Akashic's Noir series. Under Cheryl Lu-Lien Tan's tutelage, the stories puncture the stereotypes associated with Singapore and push the genre in new directions.
--Chicago Center for Literature and Photography Included in Recent Books of Note, Toronto Star Across the book as a whole a picture emerges of Singapore, an image at variance with tourist board literature and with the popular conception of a safe but over-controlled conformist society.
--Crime Review (UK) Launched with the summer '04 award-winning best seller Brooklyn Noir, Akashic Books continues its groundbreaking series of original noir anthologies. Each book is comprised of all-new stories, each one set in a distinct neighborhood or location within the city of the book. Brand-new stories by: Colin Goh, Simon Tay/Donald Tee Quee Ho, Philip Jeyaretnam, Colin Cheong, Cheryl Lu-Lien Tan, Monica Bhide, S.J. Rozan, Lawrence Osborne, Suchen Christine Lim, Ovidia Yu, Damon Chua, Johann S. Lee, Dave Chua, and Nury Vittachi. From the introduction by Cheryl Lu-Lien Tan: Say Singapore to anyone and you'll likely hear one of a few words: Caning. Fines. Chewing gum. For much of the West, the narrative of Singapore--a modern Southeast Asian city-state perched on an island on the tip of the Malay Peninsula--has been marked largely by its government's strict laws and unwavering enforcement of them...As much as I understand these outside viewpoints, I have always lamented that the quirky and dark complexities of my native country's culture rarely seem to make it past its borders... Beneath its sparkling veneer is a country teeming with shadows...And its stories remain. The rich stories that attracted literary lions W. Somerset Maugham and Rudyard Kipling to hold court at the Raffles Hotel (where the Singapore Sling was created) are still sprinkled throughout its neighborhoods. And in the following pages, you'll get the chance to discover some of them... You'll find stories from some of the best contemporary writers in Singapore--three of them winners of the Singapore Literature Prize, essentially the country's Pulitzer: Simon Tay, writing as Donald Tee Quee Ho, tells the story of a hard-boiled detective who inadvertently wends his way into the underbelly of organized crime, Colin Cheong shows us a surprising side to the country's ubiquitous cheerful 'taxi uncle, ' while Suchen Christine Lim spins a wistful tale of a Chinese temple medium whose past resurges to haunt her... As for mine, I chose a setting close to my heart--the kelongs, or old fisheries on stilts, that once dotted the waters of Singapore but are gradually disappearing. I have a deep sense of romance about these kelongs, along with the many other settings, characters, nuances, and quirks that you'll see in these stories. They're intense, inky, nebulous. There is evil, sadness, a foreboding. And liars, cheaters, the valiant abound. This is a Singapore rarely explored in Western literature--until now. No Disneyland here; but there is a death penalty.

Cheryl Lu-Lien Tan is the New York-based author of A Tiger in the Kitchen: A Memoir of Food and Family. A native of Singapore, she is working on her second book, a novel. A former staff writer at the Wall Street Journal, her work has also appeared in the New York Times and the Washington Post, among other publications. She has been an artist in residence at Yaddo and the Djerassi Resident Artists Program.
Loading...
or support indie stores by buying on