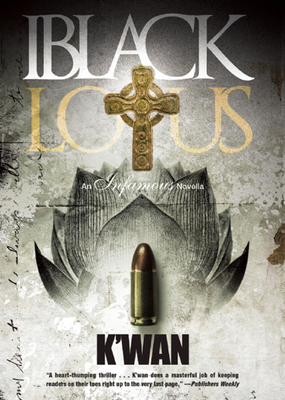 Selected for the Library Services for Youth in Custody 2015 In The Margins List One of Library Journal's Best African American Fiction Books of 2014 A] heart-thumping thriller...K'wan does a masterful job of keeping readers on their toes right up to the very last page.
--Publishers Weekly Fans expecting another thug-in-the-street story will be pleasantly surprised at this rough police procedural.
--Library Journal K'wan steadily builds to a frantic, movie-worthy climax.
--Entertainment Weekly Included in Written Magazine's Publisher's Picks: 30-Books-in-90-Days list Yet another heart-thumping thriller by this Hip Hop author who delivers.
--Library Services for Youth in Custody This book features the sublime story and character development that K'wan is known for.
--Urban Reviews One of hip-hop fiction's hottest authors.
--King The legacies of Iceberg Slim and Donald Goines are forever preserved.
--Upscale Black Lotus is an absolutely riveting read...an edge-of-the-seat nail-biter...you won't be disappointed.
--Zachary Mule Well-written at a fast pace...the suspense is cutting edge and cunning. Even if you are on top of your sleuth game, you will not figure out the game players or assassin until the end...Hats off to you K'wan.
--Ski-wee's Book Corner Detective James Wolf earned the nickname Lone Wolf from his inability to work with a partner. He's a hard cop who doesn't mind bending the rules to the point of breaking them to make a case, which is why Internal Affairs is digging in his backyard, looking for buried bones. People are starting to wonder: Which side of the law is the Lone Wolf really hunting for? His career hanging on by a thread, he needs a major show of good faith to keep employed and out of prison. That's when he gets the call. From the moment he arrives at the crime scene, Detective Wolf knows that he's in over his head. He's a narcotics detective, called in to consult on a homicide, but this is no ordinary homicide--a priest was butchered and left for dead inside his own church, with the promise of more bodies to follow. The only lead is the killer's calling card: a black lotus flower left at the crime scene. Detective Wolf now has the opportunity to quietly track and stop the Black Lotus before the next victim is claimed, in exchange for wiping his service record clean. Accepting this case started as Detective Wolf's attempt to get Internal Affairs off his back. But when his hunt for the Black Lotus leads him to a cold case from his past, it becomes personal. Infamous Books, curated by Albert Prodigy Johnson of the legendary hip-hop group Mobb Deep, is a revolutionary partnership that pairs the Infamous Records brand with Brooklyn-based independent publisher Akashic Books. Infamous Books' mission is to connect readers worldwide to crime fiction and street lit authors both familiar and new.

K'wan is a best-selling, award-winning author of over a dozen titles, including Gangsta, Road Dawgz, Street Dreams, Hoodlum, Hood Rat, Section 8, Animal, and Animal II. He has been featured in Vibe, King, Entertainment Weekly, and Time magazine. K'wan was the recipient of the 2012 and 2013 Street Lit Book Award Medals (SLBAM) in adult fiction for Eviction Notice and Animal. His credits also include featured commentary in the documentary Iceberg Slim: Portrait of a Pimp (produced by Ice-T) as well as a recurring role as an analyst on TV One's Celebrity Crime Files. K'wan currently resides in New Jersey where he is working on his next novel. Black Lotus is his latest work.
Loading...
or support indie stores by buying on