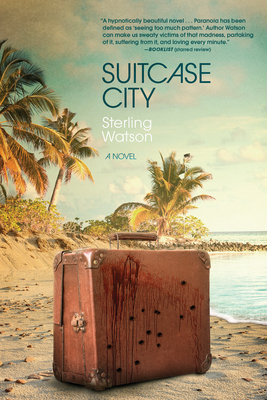 The telling is masterful...Sit back and enjoy Watson's latest. It's better than bourbon on the rocks.
--Kirkus Reviews, Starred review Hypnotically beautiful novel...Paranoia has been defined as 'seeing too much pattern.' Author Watson can make us sweaty victims of that madness, partaking of it, suffering from it, and loving every minute.
--Booklist, Starred review Watson's magic is in pacing and taut prose...Suitcase City is an absorbing thriller, a vivid adventure in a bright, humid, perilous underworld... A] tense, bloody thriller with a strong sense of place and a soft heart.
--Shelf Awareness, Starred review A] noir gem...a deeply contemplative and darkly poetic prose style complements the well-crafted plot.
--Publishers Weekly A solid revenge tale...There is plenty of action to be had in this suspense tale, but it is the examination of the characters' motivations that really makes it shine. For fans of Lee Child and Nicci French.
--Library Journal Gripping....As Watson] spins additional threads within the plot, deepening our interest in even minor characters, his grip remains steady....Peeling back the layers of Tampa society to reveal a crosshatching of race and class--the country club scenes are particularly fine--Watson stealthily heightens the suspense.
--Barnes & Noble Review Watson weaves...questions about race into a plot that takes one bloody turn after another, a crescendo of violence that ends with a day at sea that might be the most chilling of all.
--Tampa Bay Times An] irresistible earworm of a novel...With its airtight atmosphere of impending, life-sinking doom, and taut language evoking palpable Gulf Coast Florida seediness, Suitcase City duly takes its place alongside the best works of former Floridian Pete Dexter, and the brilliant Tampa novels of Dennis Lehane.
--Paste Magazine Suitcase City is] such a damn great book, a too-rare (and sometimes nearly too real) depiction of the wildly different worlds that exist side by side in the city by the bay....Events uncoil with an unflashy confidence and understated poetry, drawing in diverse characters whose deep inner lives give the wire-tight plot a thumping, nervous heart.
--Creative Loafing Tampa Suitcase City is a beautifully crafted labyrinth of plot and subplot.
--Florida Book Review The novels of Sterling Watson are to be treasured and passed on to the next generation.
--Dennis Lehane, author of Mystic River Sterling Watson is an American treasure. If this taut literary crime novel doesn't center him on the map, we should change maps.
--Tom Franklin, author of Crooked Letter, Crooked Letter I am a huge fan of Sterling Watson's writing, and take it from me: Suitcase City is arguably his best novel to date. I began reading and did not look up again until the very last page, so taken was I by its twists and turns, its explorations of race and honor and the love a father has for his daughter. Turn off your phone, lock your door, and dive into Suitcase City.
--Ann Hood, author of The Obituary Writer As Watson reminds us, corruption and cruelty survive through their uncanny ability to take on new shapes.
--Laura Lippman, author of I'd Know You Anywhere A man gets himself into a little bit of trouble, then a little bit more, then a lot. And then his whole world becomes a nightmare. How does he get himself out of this mess of his own creation? The answer involves the end of an extramarital affair, reconciliation with a daughter he has neglected, and a deadly encounter with a man who comes out of the past bearing bad news and the keys to a new life. Set in Tampa, Florida, in the late 1980s, Suitcase City captures the glitter of the high life and the steamy essence of low places in the Cigar City. As always, Sterling Watson tells his story in prose that sings.

Sterling Watson is the author of six novels, including Sweet Dream Baby and Fighting in the Shade. His short fiction and nonfiction have appeared in the Prairie Schooner, the Georgia Review, the Los Angeles Times Book Review, the Michigan Quarterly Review, and the Southern Review. He was director of the Creative Writing Program at Eckerd College for twenty years and is the college's Peter Meinke Professor Emeritus of Literature and Creative Writing. Suitcase City is his latest work.
Loading...
or support indie stores by buying on