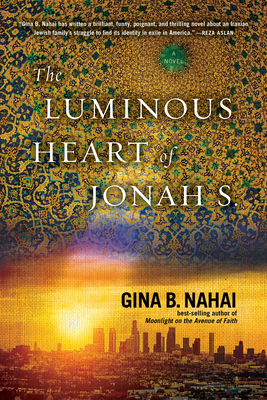 The Luminous Heart of Jonah S.

Longlisted for the 2016 International Dublin Literary Award Finalist for the Jewish Book Council's 2014 JJ Greenberg Memorial Award "Lyrical, shrewd, and daring novelist Nahai...writes with acute emotional and nearly anthropological perception, laser-wit, and deep compassion....With touches of magic realism, extraordinary characters, and a spiraling, multigenerational plot involving fraud, a murder mystery, epic suffering, heroic generosity, women's struggle for freedom, and the clash between East and West, Nahai's mythic, tragic, often beautiful immigrant family saga illuminates timeless questions of prejudice, trauma, inheritance, loyalty, and love."
--Booklist, Starred review "A riveting tale....Readers will be well rewarded."
--Publishers Weekly, Starred review "A wide-ranging, page-turning, magical realist, multigenerational family saga and Iranian-Jewish-American immigration tale enveloped in a murder mystery...it both entertains and instructs, and its differing genres seem more complimentary than conflicting."
--New York Journal of Books "Nahai has crafted an engaging combination of family saga and murder mystery, placed it in the framework of a relatively unknown subculture, and people it with fascinating characters. Flavored with both elements of magical realism and down-to-earth observations, The Luminous Heart of Jonah S. brings a little-known Los Angeles community to vivid life."
--Shelf Awareness "What results is a novel that feels more universal than anything, and an engrossing, expansive epic that charts not only thousands years of Iranian Jewish life, but the brutality of one family's survival amidst revolution and cultural upheaval."
--Kirkus Reviews, Feature on Gina B. Nahai "A bold, brave novel...as surprising as it is satisfying....Captivating."
--Forbes "One of the many pleasures of this sprawling, multigenerational story is the way it transcends the specifics of the Iranian diaspora with insights that could apply to anyone."
--LA Weekly "One of Nahai's gifts is her astute observation of this community, her own, which she describes with unsparing precision."
--Los Angeles Review of Books "The Luminous Heart of Jonah S. is a masterpiece that is simultaneously poetic in its unfurling, trans-generational plot, and brutally to the point in the style of a hard-boiled crime novel...This is a book you should not miss."
--San Francisco Book Review "Nahai's eye for detail, whether it's succinctly summing up a funeral or providing a description of a Tehran summer, always seems to be spot on."
--PopMatters "An intriguing murder-mystery journey anchored within the Iranian-Jewish community of Los Angeles. Vivid and raw...Nahai masterfully introduces us to the mythical and mundane layers that make up Iranian-American identity."
--Washington Independent Review of Books "This is irresistible storytelling...Nahai uses her estimable gifts to offer a nuanced, sometimes satirical portrait of the tight-knit Iranian-Jewish exile community in Los Angeles...It's a fascinating read."
--BookPage From Tehran to Los Angeles, The Luminous Heart of Jonah S. is a sweeping saga that tells the story of the Soleymans, an Iranian Jewish family tormented for decades by Raphael's Son, a crafty and unscrupulous financier who has futilely claimed to be an heir to the family's fortune. Forty years later in contemporary Los Angeles, Raphael's Son has nearly achieved his goal--until he suddenly disappears, presumed by many to have been murdered. The possible suspects are legion: his long-suffering wife; numerous members of the Soleyman clan exacting revenge; the scores of investors he bankrupted in a Ponzi scheme; or perhaps even his disgruntled bookkeeper and longtime confidant. Award-winning novelist Gina B. Nahai pulls back the curtain on a close-knit community that survived centuries of persecution in Iran before settling and thriving in the United States, but now finds itself divided to the core by one of its own members. By turns hilarious and affecting, The Luminous Heart of Jonah S. examines the eternal bonds of family and community, and the lasting scars of exile.

Gina B. Nahai is a best-selling author, columnist, and full-time lecturer at USC's Master of Professional Writing Program. Her novels have been translated into eighteen languages, and have been selected as "Best Books of the Year" by the Los Angeles Times and the Chicago Tribune. She has also been a finalist for the Orange Prize, the International IMPAC Dublin Literary Award, and the Harold U. Ribalow Prize, and has won the Los Angeles Arts Council Award, the Persian Heritage Foundation's Award, the Simon Rockower Award, and the Phi Kappa Phi Award. Her writing has appeared in the Los Angeles Times, Chicago Tribune, San Francisco Chronicle, Los Angeles magazine, Publishers Weekly, and the Huffington Post, among others. She writes a monthly column for the Jewish Journal of Greater Los Angeles, and is a three-time finalist for an LA Press Club Award. Nahai holds a BA and a Masters degree in International Relations from UCLA, and a Master of Professional Writing from USC. She's a former consultant for the Rand Corporation, and a frequent lecturer on the politics of pre- and postrevolutionary Iran. The Luminous Heart of Jonah S. is her latest novel.

The Luminous Heart of Jonah S. portray a community largely obsessed with wealth, beauty, and success. Is this a fair characterization?

The book describes Raphael’s Son and the Riff Raff as having adopted Orthodox Judaism in order to gain credibility with their future victims. At the same time, it mentions that Iranian Jews are increasingly becoming orthodox in LA and NY. What are the implications of these conversions?

A corrupt union boss, two sleazy underlings, and a weak and ineffective city administration. How do these elements from the book relate to the actual current state of affairs in LA?

So much of what happens in the story revolves around the concept of ah-beh-roo—a word for which there is no direct translation in English. What role do you think it plays in your own life?

Multi-million dollar mansions, outrageously expensive cars, maids who don’t like to clean and a law enforcement that is indifferent to the suffering of thousands of Raphael’s Son’s victims—is this a caricature of LA, or the real thing?

The issue of assimilation is one that many an immigrant community has grappled with in this country. Do you see Iranians Jews assimilating in the near future, or will they (like, for example, the Armenian community in diaspora) retain their language, culture, and distinct identity?

“What you we win, and lose, when we leave a country behind?” This is a question that many of the characters in the book face. How would you answer it?