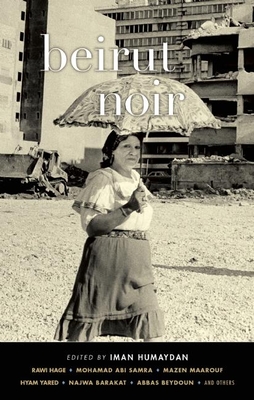 No book could possibly describe the myriad different faces of twenty-first century Beirut better than Beirut Noir, yet another in the fabulous Akashic Noir series that should dominate at least one shelf of any crime fan's library.
--CrimeReads, included in Paul French's Column on Beirut Crime Fiction

Humaydan writes in her introduction to this haunting anthology that 'all of the stories are somehow framed by the Lebanese civil war, which lasted from approximately 1974 until 1990...' The crimes in this Akashic noir volume are often submerged in the greater tragedy of a beautiful city constantly torn within and without by violence.
--Publishers Weekly

The stories' individual approaches to noir are as diverse as the Beirut landscape, its residents and exiles.
--Middle East Monitor

In Beirut Noir, Iman Humaydan has selected a beautiful and often heartbreaking jigsaw portrait of its eponymous city....These are writers, multiple generations of Beiruti, who live and breathe the neighborhoods of their capital, and each seems to care about even the worst of it. And there is occasional humor to be found in the darkest of its spaces. Beirut, as Humaydan explains in her introduction, is a 'city that dances on its wounds.' This is a book that transcends its place in a series and stands on its own as something terrific.
--World Literature Today

The Lebanese authors featured in the collection draw from a much broader palette of Beirut life, and, true to the genre, they tap into their city's dark past and uncertain present. Some stories are absurd and humorous, but almost all are haunted in some way by a nagging memory, a war, a death.
--The National

Akashic Books continues its groundbreaking series of original noir anthologies, launched in 2004 with Brooklyn Noir. Each story is set in a distinct neighborhood or location within the city of the book.

Most of the writers in this volume are still living in Beirut, so this is an important contribution to Middle East literature--not the outsider's perspective that often characterizes contemporary literature set in the region.

From the introduction by Iman Humaydan (translated by Michelle Hartman):

Beirut is a city of contradiction and paradox. It is an urban and rural city, one of violence and forgiveness, memory and forgetfulness. Beirut is a city of war and peace. This short story collection is a part of a vibrant, living recovery of Beirut. Beirut Noir recovers the city once again through writing, through the literary visions of its authors...

From within this collection of stories, a general attitude toward Beirut emerges: the city is viewed from a position of critique, doubt, disappointment, and despair. The stories here show the vast maze of the city that can't be found in tourist brochures or nostalgic depictions of Beirut that are completely out of touch with reality. Perhaps this goes without saying in a collection of stories titled Beirut Noir. But the 'noir' label here should be viewed from multiple angles, and it takes on many different forms in the stories. No doubt this is because it is imbricated in the distinct moments that Beirut has lived through and how they are depicted in the stories.

Iman Humaydan is a Lebanese writer, creative writing teacher, translator, editor/publisher, and journalist. Her novels B as in Beirut, Wild Mulberries, Other Lives, and The Weight of Paradise, all written in Arabic, have been translated and published internationally. She is the cofounder of the Lebanese chapter of PEN, and splits her time between Beirut and Paris. She is the editor of Beirut Noir.
Loading...
or
Not Currently Available for Direct Purchase