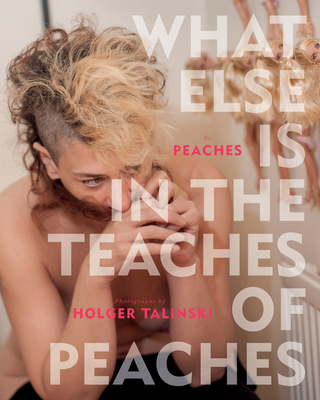 What Else Is in the Teaches of Peaches

One of the Huffington Post's Best Art Books of 2015 Peaches] has teamed up with her longtime tour photographer Holger Talinski to look back at a brazen career that has captured the attention of outsider artists and massive pop stars alike, ranging from Michael Stipe to PJ Harvey to Iggy Pop...Along with Holger's uncompromising, often raw imagery, the book includes stories from artists who have championed Peaches's work over the years.
--New York Times T Magazine It takes a lot of grueling work to pull off what Peaches does so subversively night after night on tour and in theater productions. That's the takeaway from this revealing (and NSFW) photo book on the electro-pop provocateur, as seen through the lens of photographer Talinski and featuring essays by Michael Stipe, Yoko Ono, and Elliot] Page.
--Boston Globe Electronic musician and performance artist Peaches has made a career out of pushing boundaries, and her new book is equally transgressive. Photographer Holger Talinski captures the artist onstage and off in the outrageous costumes that have been a performance signature for her, and in quieter moments away from the strobe lights.
--San Francisco Chronicle One flip through the glossy new monograph What Else Is In the Teaches of Peaches is all it takes to get absorbed into the post-punk wonderland of pop culture icon Peaches.
--W Magazine Peaches is an attitude and a sensibility....She's iconic, and her iconography is important.
--The Globe and Mail One of Loud and Quiet Magazine's Best Books of 2015 The bare-all book shows Peaches on and off stage, focusing on her efforts to shatter gender stereotypes, promote sex positivity, and push the boundaries of art and performance.
--Vice Magazine, The Creators Project What Else Is in the Teaches of Peaches, a new book of photography, attempts to capture more: Peaches onstage, backstage, in her 30-boob breastplate, on the crapper, on a cross, passed out, convalescing, performing for Yoko Ono, curled up with family, recording with Iggy Pop. It's a groupie's delight.
--SF Weekly For Peaches fans, the collection offers glimpses into both the public and private life of the artist who put feminist electroclash on the map. Peaches led the way, not only for other underground electronic acts like Le Tigre, Ladytron, and Chicks on Speed, but also artists that went on to major mainstream success. Would M.I.A. exist without Peaches? Lady Gaga? In her current iteration, Miley Cyrus?...In the end, What Else Is in the Teaches of Peaches] is a reminder that Peaches, the artist and the musician...forged a vibrant, genre-bending career that continues to throb with spirit, transgression, energy, and ambition.
--KQED Arts Perhaps what hits you most of all, maybe more than the striking costumes and occasional nudity, is how much fun Peaches' life appears to be. Less than halfway into the book, you start to trust the Peaches/Talinski collaborative union, and you somehow come to realise that it's all authentic, magic and reality. There's none of the staginess that you sometimes see in photo books of pop stars, particularly those who are led around by their egos.
--PopMatters This volume presents a mesmerizing collection of Holger Talinski's evocative and sometimes erotic photos of transgressive musical icon Peaches, on and off stage, with accompanying text by Peaches, Michael Stipe (R.E.M.), Yoko Ono, and the actor Elliot Page, best known for their lead role in the film Juno, which garnered them an Oscar nomination.

Peaches, born Merrill Nisker in Toronto, is a musician, singer, performance artist, producer, filmmaker, actor, and writer, who has lived and worked in Berlin since 2000. She has released four albums--The Teaches of Peaches, Fatherfucker, Impeach My Bush, I Feel Cream--and a new album is forthcoming. She has collaborated and appeared as a guest vocalist on albums by P!nk, R.E.M., Iggy Pop, Major Lazer, and Christina Aguilera, to mention a few. Her songs have been featured in dozens of films and TV shows including Mean Girls, Lost in Translation, Whip It, 30 Rock, Ugly Betty, South Park, and True Blood. Peaches has performed in more than fifty countries and has constantly toured the world for the past fourteen years. She created Peaches Christ Superstar, where she performed the entire rock opera Jesus Christ Superstar as a one-woman show; and she sang the lead role of L'Orfeo in a production of Monteverdi's seventeenth-century Italian opera. Peaches's most ambitious work to date was the mythical autobiographical electrorock stage-show-turned-film called Peaches Does Herself. The feature film debuted at the 2012 Toronto Film Festival and was warmly received at over seventy film festivals around the world. Peaches has just completed her first new album in over five years entitled RUB which will be released in 2015. Holger Talinski (b. 1981) is a Berlin-based photographer focusing on portrait and documentary photography. He is also passionate about skateboarding, which was the reason he started taking photos in the first place--to document his and his friends' lifestyle. He studied photography in Bielefeld, Germany, and interned in New York with Benedict F. Fernandez, most well-known for photographing Martin Luther King Jr. Holger's work has also been commissioned in Europe, the United States, Thailand, and India. visit holgertalinski [dot] de, and you can reach Holger at hello [at] holgertalinski [dot] de. His photographs appear in What Else Is in the Teaches of Peaches.
Loading...
or support indie stores by buying on