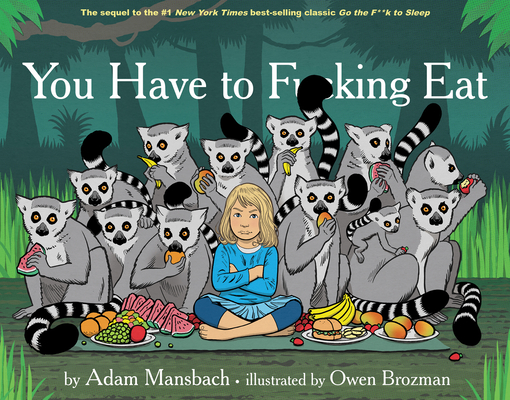 You Have to Fucking Eat (Go the Fuck to Sleep #2)

A New York Times Best Seller One of BookRiot's Must-Read Books from Indie Presses for 2014 One of Flavorwire's 50 Best Independent Fiction and Poetry Books of 2014 "You Have to F***ing Eat makes parents of picky eaters smile."
--TODAY Parents "Adam Mansbach...will delight exhausted and exasperated parents everywhere for a second time with You Have to F**king Eat--another children's book that is most definitely not for children."
--Entertainment Weekly "An equally hilarious ode to kids at the table."
--Huffington Post "Parents, Adam Mansbach gets you. He understood that sometimes your kids just won't go the f**k to sleep. And, in his new foulmouthed bedtime book for parents out Wednesday, he understands that sometimes they just won't f**king eat. And he knows, well, it's really f**king annoying. So how about some f**king comic relief?"
--GQ "A likeable variation on a universal f***ing theme."
--Kirkus Reviews "A hilarious sendup of the eternal fight between kids and their parents over what to eat and when--if at all."
--New York Journal of Books "If you're a frustrated parent with a picky child, or even just one who appreciates 'deranged' humor, especially humor that rhymes, this is a terrific read for you...Parents will enjoy a good chuckle and subtle reminder that everything is better, including parenthood, if tackled with a little bit of humor."
--San Francisco Book Review "You Have to F**cking Eat, Sequel to Go the F**k to Sleep, Is Finally F**king Coming...It will arrive just in time to gift it to your brother-in-law, who, upon unwrapping it, will clutch it immediately to his chest and shake his head furiously at his waist-high daughter as she claws at him with her chewed up nails. 'No, no, it's not for you, ' he'll say, laughing and crying at the same time."
--Flavorwire "An uproarious spoof of bedtime board books."
--San Francisco Chronicle "A 21st-century bedtime story for the ages (and all ages) if there ever was one."
--Bay Area Reporter "Parents, when your precious angel rips you from your three hours of sleep to demand food that he won't actually eat, you'll want this f'ing book."
--Mashable "Forthcoming new book by genius funnyman Adam Mansbach."
--BoingBoing "Mansbach freely, fabulously curses out the uncensored truth; Brozman makes sure you'll recognize your irresistible, equitably diverse mini-mes with those all-too-familiar expressions, from utter disdain to overwhelming trust and every little eyeball roll in between."
--BookDragon/Smithsonian Asian Pacific American Center "If your kid has never presented you with some new mind-boggling preference at mealtime, I suspect you're lying."
--Persephone Magazine "This book is genius. It is what every parent is thinking when their child refuses dinner."
--Old School/New School Mom "With this soon-to-be crude classic, Adam Mansbach has nailed it with his undeniable animal/child comparisons all cozily complimented by Owen Brozman's humorous illustration--we dare you not to giggle into your eggnog."
--Curious Mom "Illustrations are just as enjoyable and the narrative again paints the perfect picture."
--Roundtable Reviews From the author of the international best seller Go the F*** to Sleep comes a long-awaited sequel about the other great parental frustration: getting your little angel to eat something that even vaguely resembles a normal meal. Profane, loving, and deeply cathartic, You Have to F***ing Eat breaks the code of child-rearing silence, giving moms and dads new, old, grand- and expectant, a much-needed chance to laugh about a universal problem. A perfect gift book like the smash hit Go the F*** to Sleep (over 1.5 million copies sold worldwide ), You Have to F***ing Eat perfectly captures Mansbach's trademark humor, which is simultaneously affectionate and radically honest. You probably shouldn't read it to your kids, so there's a kid-friendly version, Seriously, You Have to Eat.

Adam Mansbach is the author of the #1 international bestseller Go the F*** to Sleep, as well as the novels Rage Is Back, Angry Black White Boy, The Dead Run, and The End of the Jews, winner of the California Book Award. He has written for the New Yorker, the New York Times, Esquire, the Believer, and National Public Radio's All Things Considered. His daughter Vivien is not as picky about food as she used to be. Owen Brozman has illustrated for National Geographic, Time Out New York, Scholastic, Ninja Tune, Definitive Jux Records, and numerous other clients. He and Mansbach's previous collaboration is the acclaimed graphic novel Nature of the Beast, and his work has been recognized by the Society of Illustrators of Los Angeles, Creative Quarterly Journal, 3X3 Magazine, and many more. He lives in Brooklyn with his wife and daughter, whose favorite food is bananas.
Loading...
or support indie stores by buying on