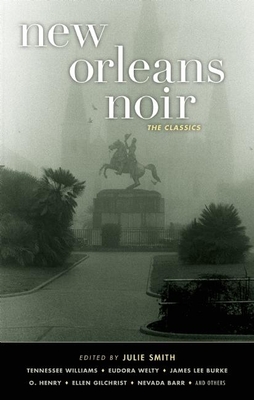 One installment of noir stories from New Orleans wasn't enough, so Akashic and editor Julie Smith came back with a follow-up focusing on the 'classics.' That means you'll get a healthy portion of noir stories from across New Orleans written by the likes of Tennessee Williams and Eudora Welty, along with more modern offerings from Poppy Z. Brite, Ace Atkins, and Maurice Carlos Ruffin.
--CrimeReads, included in New Orleans: The Crime Fiction of Carnival

An] irresistible sequel to Smith's New Orleans Noir....Anyone who knows New Orleans even slightly will relish revisiting the city in story after story. For anyone who has never been to New Orleans, this is a great introduction to its neighborhoods and history.
--Publishers Weekly, Starred review

Ten years after the publication of the original New Orleans Noir, Akashic's 'Noir' series returns with a follow-up....Each entry is strong, but the collection is worth reading alone for Poppy Z. Brite's 'Mussolini and the Axeman's Jazz, ' a delirious and brutal ghost story....Strongly recommended for fans of the Akashic anthologies and Hard Case Crime mysteries and lovers of New Orleans fiction. Devotees of Southern gothic fiction (e.g., the works of Flannery O'Connor and Tom Franklin.) will also find much to enjoy.
--Library Journal, Starred review

Smith, who edited Akashic's original New Orleans Noir (2007), goes back for a second trip to the Big Easy.
--Kirkus Reviews

A riveting read.
--Back to Books

This anthology really has the feel of New Orleans....I enjoyed this batch of stories. Good ones all the way through. Give it a try.
--Journey of a Bookseller

Akashic Books continues its award-winning series of original noir anthologies, launched in 2004 with Brooklyn Noir. Each volume comprises stories set in a distinct neighborhood or location within the respective city.

From the introduction by Julie Smith:

A glittering constellation of writers has passed through New Orleans--including Mark Twain, Sherwood Anderson, O. Henry, and even Walt Whitman, to name some of the not-so-usual suspects. Then there are the ones whose sojourns here are better known, the ones on whom we pride ourselves, such as Tennessee Williams, William Faulkner, Eudora Welty, Ellen Gilchrist, and James Lee Burke.

It was an anthologist's feast--just about everybody who came to New Orleans wrote about it. But there were surprises as well...

If you're from New Orleans, the neighborhood theme will resonate like Tibetan temple bells. And yet, surely every city has similar hoods, similar behavior patterns, similar travails--and has had them forever. 'Indeed, ' wrote Voltaire, 'history is nothing more than a tableau of crimes and misfortunes.'

Julie Smith is an Edgar Award winner for best novel, and the author of four mystery series set in New Orleans and San Francisco. A former journalist, she has worked for newspapers in both those cities and now lives in New Orleans. She is the owner of booksBnimble, which publishes mysteries and other quality works digitally. In 2007 Smith edited the best-selling anthology New Orleans Noir for Akashic Books.
Loading...
or support indie stores by buying on