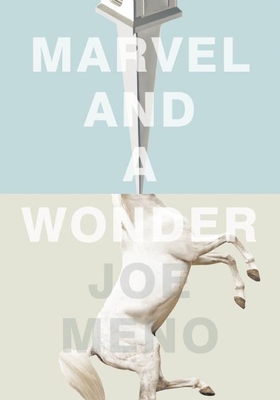 Marvel and a Wonder

Winner of the Society of Midland Authors Award for the Region's Best Books of 2015 (Adult Fiction) Named a Booklist Editors' Choice for 2015 Longlisted for the American Library Association's 2016 Andrew Carnegie Medal for Excellence in Fiction Compelling and necessary.... Meno] has a knack for giving small happenings emotional weight....Meno knows how to make you love his characters, want what they want. But don't think he's going to let things turn out well for them. Marvels and wonders aren't worth the trouble. Fortunately, this book is.
--New York Times Book Review A] rugged page-turner....There's a bit of the country noir of Daniel Woodrell's Winter's Bone in the stark atmosphere Mr. Meno evokes (A faded town, fading, harried with dusty light, midafternoon), and a bit of the Clint Eastwood movie Gran Torino in the story of the vigilante grandfather. But the writing is propulsive enough to make you forget its influences. And at moments the book's consuming darkness is lifted by potent, if inscrutable visions of the talismanic horse--a flash of lightning curving along the horizon.
--Wall Street Journal But in two new books--a big novel, Marvel and a Wonder, and the anthology Chicago Noir: The Classics, published simultaneously in early September by Akashic in hardcover and paperback--we're reminded that Meno has a dark side that on occasion he lets out of jail, allowing it to cast a long and menacing shadow.
--Chicago Tribune Evoking William Faulkner and Cormac McCarthy, Meno's suspenseful, mordantly incisive, many-layered tale can also be read as an equine Moby-Dick. As he tracks the bewildering seismic shifts under way in America, Meno celebrates everyday marvels, including the hard-proven love between grandfather and grandson.
--Booklist, Starred review In this high-stakes, mordantly incisive, compassionate drama, Quentin, a mixed-race teen, is spending the summer with Jim, his white grandfather, when a magnificent white racehorse is inexplicably delivered to Jim's Indiana farm.
--Booklist, Editors' Choice Talented Meno has penned a wise and touching novel of love, loyalty, courage; an extraordinary book not to be missed.
--Library Journal, Starred review "Marvel and a Wonder . . . is] a great contemporary Western that's deliciously dark and full of unpleasant characters. I loved it, for whatever grim reason that lurks in my soul (and it's got a fantastic cover), though I'd say it's probably not for the faint of heart."
-- Library Journal, What We/re Reading Section Marvel and a Wonder is a darkly mesmerizing epic and literary page-turner set at the end of the twentieth century. In summer 1995, Jim Falls, a Korean War vet, struggles to raise his sixteen-year-old grandson, Quentin, on a farm in southern Indiana. In July, they receive a mysterious gift--a beautiful quarter horse--which upends the balance of their difficult lives. The horse's appearance catches the attention of a pair of troubled, meth-dealing brothers and, after a violent altercation, the horse is stolen and sold. Grandfather and grandson must travel the landscape of the bleak heartland to reclaim the animal and to confront the ruthless party that has taken possession of it. Along the way, both will be forced to face the misperceptions and tragedies of their past. Evoking the writing of William Faulkner and Denis Johnson, this brilliant, deeply moving work explores the harrowing, often beautiful marvels of a nation challenged by its own beliefs. Ambitious, expansive, and laden with suspense, Marvel and a Wonder presents an unforgettable pair of protagonists at the beginning of one America and the end of another.

Joe Meno is a fiction writer and playwright who lives in Chicago. He is the winner of the Nelson Algren Literary Award, a Pushcart Prize, the Great Lakes Book Award, and a finalist for the Story Prize. He is the editor of Chicago Noir: The Classics and the author of two short story collections and multiple novels including the best sellers Hairstyles of the Damned and The Boy Detective Fails; Office Girl; and his latest novel, Marvel and a Wonder. He is a professor in the Department of Creative Writing at Columbia College Chicago.
Loading...
or support indie stores by buying on