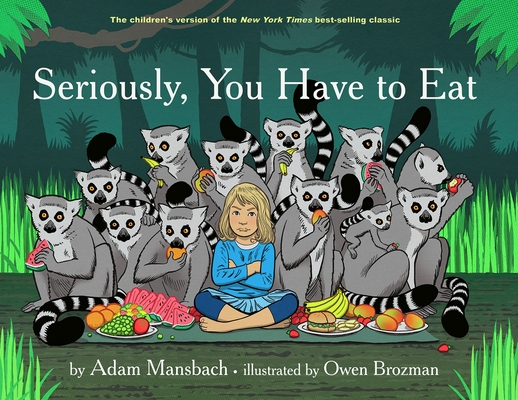 Seriously, You Have to Eat

Parents and children alike will surely welcome a pause to bond over a shared recognition that their endless battles are not theirs alone--before they get back to them.
--New York Journal of Books Everything you hoped for and more....Adam Mansbach, the author and Owen Brozman, the illustrator, have definitely hit a chord with parents.
--Examiner.com A fun title to read aloud and share
--Midwest Book Review This hilarious book goes into the struggle of getting children to eat and how frustrating it is for parents....With the age-old struggle of getting kids to eat, we are certain parents and grandparents alike will love this book
--Budget Earth Just the humor parents needs as they deal with the frustrations of a picky eater
--Parenting Healthy, included in Holiday Gift Guide This is a great gift for a parent because its reality in a funny, humorous way that only a child would get.
--Emily's Frugal Tips/Sew Crazy Life, included in Holiday Gift Guide A super fun book that will have readers laughing out loud. Mansbach's quirky, clever humor is unforgettable and absolutely addicting While Seriously, You Have to Eat is totally kid appropriate, adults will seriously chuckle too.
--Word Spelunking On the heels of the New York Times best seller You Have to F**king Eat (a sequel to the worldwide mega-best seller Go the F**k to Sleep), now comes the version that is entirely appropriate to read to--and with--children. While the message and humor will be similar to the adult version, there will, of course, be no profanity whatsoever. Step aside Green Eggs and Ham, there's a new, 21st-century book in town that will compel all finicky children to eat

Adam Mansbach's novels include the best-selling Angry Black White Boy, a San Francisco Chronicle Best Book of 2005, as well as the novels Rage is Back, The Dead Run, and The End of the Jews. His fiction and essays have appeared in the New York Times Book Review, the Believer, Granta, and the Los Angeles Times. He is the author of the worldwide best sellers Go the F**k to Sleep and You Have to F**king Eat, as well as their children's versions, Seriously, Just Go to Sleep and Seriously, You Have to Eat. Owen Brozman has illustrated for National Geographic, Time Out New York, Scholastic, Ninja Tune, Definitive Jux Records, and numerous other clients. He is the illustrator of the New York Times best seller You Have to F**king Eat, as well as the children's version, Seriously, You Have to Eat.
Loading...
or support indie stores by buying on