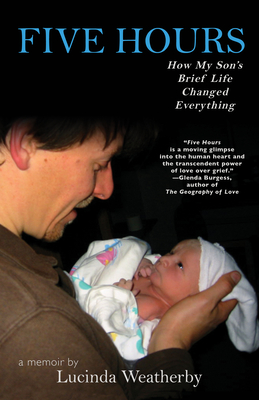 How My Son's Brief Life Changed Everything

Heartbreaking and yet uplifting, this is a beautifully written memoir that speaks to the challenges many women face regarding sexuality and motherhood.
--Wendy Kline, author of Bodies of Knowledge: Sexuality, Reproduction, and Women's Health in the Second Wave Powerful and enlightening...I saw what a gift it was for Lucinda Weatherby to carry, deliver, and finally meet her precious child, no matter how briefly. It was a profound paradigm shift for me.
--Pamela Colloff, Texas Monthly Illuminated with courage and humor, Lucinda Weatherby's memoir explores what for any of us would be an unthinkable loss. Wake up to death, and to life, Weatherby writes of her struggle to find her way, to open to the unknown, to grace. Unflinching work--frank, grave, lucid...Five Hours is a moving glimpse into the human heart and the transcendent power of love over grief.
--Glenda Burgess, author of The Geography of Love As Lucinda Weatherby herself says in her memoir, she is an ordinary woman who has opened herself to the mystery of birth and death. She has embraced both exuberance and sorrow--and it shows in these pages. With all the intimate honesty one might find in a diary, she allows us to see that she is not to be pitied, that she in fact sometimes feels herself to be the luckiest mother alive for having known five perfect hours with her son.
--Monica Wesolowska, author of Holding Silvan: A Brief Life Can the death of a newborn be anything other than a tragedy? Lucinda Weatherby's son Theo was born with trisomy 13, a rare chromosomal disorder with fatal birth defects. Rather than take extraordinary steps to prolong what would have been a short and painful life, Lucinda and her husband made the decision to let Theo go. In this brave and beautiful memoir, Lucinda tells the story of Theo's life--a life that was bathed in the love of the family members and close friends who gathered in the predawn hours to welcome him and then say goodbye--and the profound sense of grace his existence bestowed upon all of those he touched. Five Hours is also the story of a mother who is forced to confront every parent's most terrifying fear: losing a child. With unflinching honesty and eloquence and even humor, Lucinda chronicles Theo's life and death, and the inspiring aftermath of an experience most people think they wouldn't be able to survive. All readers, whether parents or not, will be moved by her ability to confront a tragedy and transform it into something healing and transcendent. Lucinda Weatherby has a BA in English and an MA in psychology. Her writing has appeared in publications such as The Sun and Connotation Press. She works as a grief counselor in Ashland, Oregon.

Lucinda Weatherby has a BA in English and an MA in psychology. Her writing has appeared in publications such as The Sun and Connotation Press. She works as a grief counselor in Ashland, Oregon.
Loading...
or
Not Currently Available for Direct Purchase