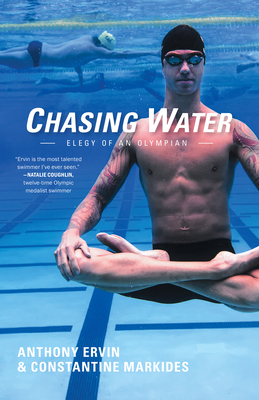 Elegy of an Olympian

"Here Ervin and swim trainer and journalist Markides combine talents to create a biography that is part first-hand narrative by Ervin, with Markides filling in the details and providing context. The formula works, pulling readers into Ervin's experience of the thrill of victory and search for meaning...Featuring more depth, breadth, truth, and the effects of reckless choices than found in traditional athlete biographies, this gripping account is just in time for the gear up to the Rio 2016 Olympics. Readers will understand the psyche and life of elite athletes as never before, then cheer Ervin on in his attempt to make another Olympic team."
--Library Journal

"A celebrated Olympian recounts how he rose to the top of his sport, crashed, and found redemption...This book, which tells his story through a narrative that interweaves the former gold medalist's memories with commentary by his friend and colleague Markides, reveals the extreme highs and lows that characterized Ervin's remarkable life and career...The author never flinches at revealing his less-than-perfect past, and the humility he demonstrates at coming to terms with his own egotism and personal shortcomings makes the book frequently compelling. A provocative and refreshingly honest redemption memoir."
--Kirkus Reviews

"Markides smartly combines his own journalistic account with a parallel narrative in which Ervin...explains his life and style. Some talents simply defy explanation, however, and Ervin may be in that category...The story of his comeback at 31 (ancient for a swimmer) is rendered more amazing by the contrast with what went before."
--Booklist

"For Anthony Ervin, the stretch between his two greatest athletic achievements--two Olympic gold medals--included a suicide attempt, a period of homelessness and a stint in a rock band. Jobs found, then lost. Too much drinking, too many drugs. Depression. Confusion. And then, a kind of rebirth."
--USA Today

"Anthony Ervin is a lot of things. He is an open book and a closed circuit, a body fueled by a brain, an old man with a young soul. He is the American Dream. He is, once again, improbably, an Olympic champion."
--Yahoo

Every four years in the Olympic cycle the surge of national interest in swimming grows, and with it a desire to be captivated by its stars. This book tells the dramatic, surprising, and sometimes provocative path that Anthony Ervin has taken to become one of those captivating Olympic heroes. Not your typical sports memoir, Chasing Water also contains arresting black-and-white drawings and a graphic story extra, as well as an inventive and mercurial narrative style that morphs chapter by chapter to reflect Ervin's restless, multifaceted life.

Ervin won a gold medal at the 2000 Sydney Olympic Games at the age of nineteen. He is an athlete branded with a slew of titles including being the first US Olympic swimmer of African American descent, along with Jewish heritage, who also grew up with Tourette's syndrome. He shocked the sporting world by retiring soon after claiming two world titles following the 2000 Olympics. Auctioning off his gold medal for charity, he set off on a part spiritual quest, part self-destructive bender that involved Zen temples, fast motorcycles, tattoo parlors, and rock 'n' roll bands. Then Ervin resurfaced in 2012 to not only make the US Olympic team twelve years after his first appearance, but to continue his career by swimming faster than ever before.

Anthony Ervin is an American Olympian who resides in Los Angeles, where he continues to pursue his career as a professional swimmer, speaker, and coach. In the 2016 Rio Olympics he won two gold medals, including one in the 50-meter free, making history as the oldest individual swimmer to win an Olympic gold medal. Constantine Markides is a New York-based swim trainer and former correspondent for the international daily newspaper Cyprus Mail. He has worked with CNN's Anderson Cooper and was featured on CBC and NPR's Marketplace. His essays and fiction have been published in various magazines and journals, including Rolling Stone. A high school state champion swimmer, Markides also swam for Columbia University.
or
Buy Here
Copyright © 2020 American Booksellers Association