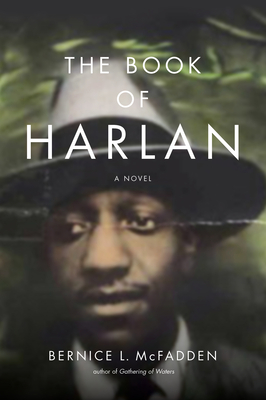 McFadden uses the experiences of her own ancestors as loose inspiration for the life of Harlan, whom she portrays from his childhood in Harlem through imprisonment in a Nazi concentration camp and his struggles afterward to put his life back together.
--Library Journal

Simply miraculous...As her saga becomes ever more spellbinding, so does the reader's astonishment at the magic she creates. This is a story about the triumph of the human spirit over bigotry, intolerance and cruelty, and at the center of The Book of Harlan is the restorative force that is music.
--Washington Post

Bernice L. McFadden took me on a melodious literary journey through time and place in her masterpiece, The Book of Harlan. It's complex, real, and raw...McFadden intricately and purposefully weaves history as a backdrop in her fiction. The Book of Harlan brilliantly explores questions about agency, purpose, freedom, and survival.
--Literary Hub, one of Nicole Dennis-Benn's 26 Books From the Last Decade that More People Should Read

McFadden's writing breaks the heart--and then heals it again. The perspective of a black man in a concentration camp is unique and harrowing and this is a riveting, worthwhile read.
--Toronto Star

The Book of Harlan is an incredible read. Bernice McFadden...has created an amazing novel that speaks to lesser known aspects of the African-American experience and illuminates the human heart and spirit. Her spare prose is rich in details that convey deep emotions and draw the reader in. This fictional narrative of Harlan Elliot's life is firmly grounded amidst real people and places--prime historical fiction, and the best book I have read this year.
--Historical Novels Review, Editors' Choice

McFadden packs a powerful punch with tight prose and short chapters that bear witness to key events in early twentieth-century history: both World Wars, the Great Depression, and the Great Migration. Partly set in the Jim Crow South, the novel succeeds in showing the prevalence of racism all across the country--whether implemented through institutionalized mechanisms or otherwise. Playing with themes of divine justice and the suffering of the righteous, McFadden presents a remarkably crisp portrait of one average man's extraordinary bravery in the face of pure evil.
--Booklist, Starred review

The Book of Harlan opens with the courtship of Harlan's parents and his 1917 birth in Macon, Georgia. After his prominent minister grandfather dies, Harlan and his parents move to Harlem, where he eventually becomes a professional musician. When Harlan and his best friend, trumpeter Lizard Robbins, are invited to perform at a popular cabaret in the Parisian enclave of Montmartre--affectionately referred to as The Harlem of Paris by black American musicians--Harlan jumps at the opportunity, convincing Lizard to join him.

Bernice L. McFadden is the author of nine critically acclaimed novels including Sugar, Loving Donovan, Nowhere Is a Place, The Warmest December, Gathering of Waters (a New York Times Editors' Choice and one of the 100 Notable Books of 2012), and Glorious, which was featured in O, The Oprah Magazine and was a finalist for the NAACP Image Award. She is a three-time Hurston/Wright Legacy Award finalist, as well as the recipient of three awards from the BCALA. McFadden lives in Brooklyn, New York.

1. When the story opens, the narrator describes Emma’s privileged life in the early 1900s. What might this propose about the accuracy of historical accounts?

2. Describe the narrator of the story. Can we be certain of who it is, or does the point of view shift throughout the story? How does the author’s method of narration relate to historical texts?

4. Is The Book of Harlan simply a historical narrative, or does it also reveal things about contemporary society?

5. While many of the characters represent different classes and races, they also share much in common. What similarities can you find between the characters? How do their differences inform the novel?

6. The author presents many representations of family and relationships. Describe some. Which are most successful? Why do you think this is?

7. Why does Lizard reinvent himself as a black man? How might this reinvention change your perception of race and culture?

8. Where you aware that people of color—black people specifically—lost their lives in the Holocaust? How did that revelation effect you?

9. Many of the characters in the novel are based on the author’s ancestors. Harlan Elliott is representative of her grandfather, Harold McFadden. With other characters—both familial and historical—the author uses real names, expanding on and reimagining true events. Why do you think the author chose to write a story centered around her family? Do you feel the portrayals are believable? Accurate? Why or why not?

10. Why do you think that the author chose the quotation by Walt Whitman as the novel’s epigraph? What might it signify?