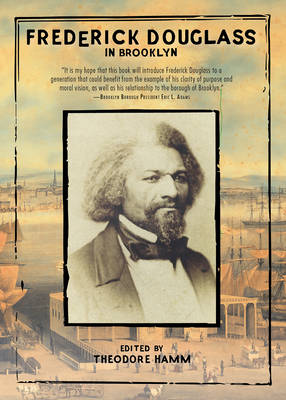 In Frederick Douglass in Brooklyn, Theodore Hamm persuasively and passionately makes the case that the borough (and former city) became a powerful forum for Douglass's abolitionist agenda in the mid-19th century after he escaped slavery in 1838.
--New York Times

Insight into the remarkable life of a remarkable man. Frederick] Douglass in Brooklyn shows how the great author and agitator associated with radicals--and he associated with the president of the United States. A fine book.
--Errol Louis, host of NY1's Road to City Hall

A collection of rousing 19th-century speeches on freedom and humanity. The eloquent orator Frederick Douglass (c. 1818-1895) delivered eight impressive speeches in Brooklyn, New York, 'far from a bastion of abolitionist support, ' which, even as late as 1886, had only a small black population...Editor Hamm provides helpful introductions and notes and gives illuminating context and perspective by including their coverage in the 'virulently proslavery' Brooklyn Eagle...Covering one speech, the Eagle defended its claim of black inferiority by asserting, 'the abject submission of a race who are content to be enslaved when there is an opportunity to be free, gives the best evidence that they are fulfilling the destiny which Providence marked out for them.' Proof that Douglass' speeches, responding to the historical exigencies of his time, amply bear rereading today.
--Kirkus Reviews

Although he never lived in Brooklyn, the great abolitionist Frederick Douglass had many friends and allies who did. Hamm has collected Douglass's searing antislavery speeches (and denunciations of him by the pro-slavery newspaper the Brooklyn Eagle) delivered at Brooklyn locales during the mid-19th century.
--Publishers Weekly, A notable African-American Title

This timely volume presents] Douglass' towering voice in a way that sounds anything but dated.
--Philadelphia Tribune

Though he never lived there, Frederick Douglass and the city of Brooklyn engaged in a profound repartee in the decades leading up to the Civil War, the disagreements between the two parties revealing the backward views of a borough that was much less progressive than it liked to think...Hamm... illuminates] the complexities of a city and a figure at the vanguard of change.
--Village Voice

This volume compiles original source material that illustrates the complex relationship between Frederick Douglass and the city of Brooklyn. Most prominent are the speeches the abolitionist gave at the Brooklyn Academy of Music, Plymouth Church, and other leading Brooklyn institutions. Whether discussing the politics of the Civil War or recounting his relationships with Abraham Lincoln and John Brown, Douglass's towering voice sounds anything but dated. An introductory essay examines the intricate ties between Douglass and Brooklyn abolitionists, while brief chapter introductions and annotations fill in the historical context.

Frederick Douglass (1818-1895) was an abolitionist leader, spokesman for racial equality, and defender of women's rights. He was born into slavery in Maryland and learned to read and write around age twelve, and it was through this that his ideological opposition to slavery began to take shape. He successfully escaped bondage in 1838. In 1845, he published his first autobiography, Narrative of the Life of Frederick Douglass, an American Slave, which became a best seller in the US and was translated into several languages. He went on to advise President Abraham Lincoln on the treatment of black soldiers during the Civil War and continued to work for equality until his death.

Theodore Hamm is chair of journalism and new media studies at St. Joseph's College in Clinton Hill, Brooklyn. His previous books include Rebel and a Cause, The New Blue Media, and Pieces of a Decade (coedited with Williams Cole). Hamm's writings about New York City history and politics have appeared recently in the Village Voice, Vice News, the New York Daily News, and Jacobin. He lives in Sunset Park, Brooklyn.
Loading...
or support indie stores by buying on