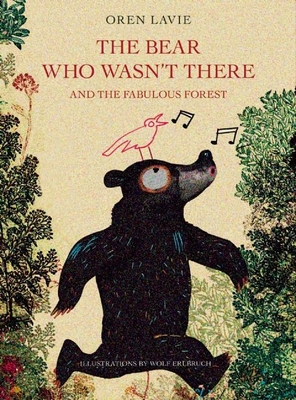 The Bear Who Wasn't There

And the Fabulous Forest

Bear's search for himself doesn't matter so much as the charm of Lavie's storytelling voice as he narrates it...Erlbruch gives the bear big, puzzled-looking eyes and a lovable grin. He lives in a forest made of ornate trees seemingly lifted from vintage engravings, whose delicate lines play off Bear's dumpy figure. Bear's encounters with various characters--the Turtle Taxi, the Penultimate Penguin--feature gentle wordplay and Lewis Carroll-like paradoxes...Everything is new to Bear, and his discoveries will delight readers.
--Publishers Weekly, Starred Review

The volume is filled with surreal gags about prepositions and adverbs, cheerful absurdity, and down the rabbit hole-style musings.
--School Library Journal

The book is filled with the bear's paradoxical, enigmatic, and sometimes Zen-like musings as he meets various creatures in the forest who assist him...This one would make for a thought-provoking read-aloud at story time. Get those children settled--it's a lengthy text--and present to them this gloriously left-of-center tale. Watch their heads spin. It'll be memorable.
--Kirkus Reviews, new children's books feature

A lovable entertainment and quest venture that veers back and forth into existential territory without missing a beat of its adorable nature.
--Center for Fiction

Young readers with a philosophical nature and an appreciation for provocative silliness will be especially gratified by Bear's self-discovery...Erlbruch's illustrations, which look like etchings, fit the story well. The Fabulous Forest effectively evokes a fairy tale feel, and Bear, a portly fellow with huge eyes, a bright red mouth, and colorful flecks in his black fur, is loveable at first sight.
--New York Journal of Books

Imaginatively written by Oren Lavie and beautifully illustrated by Wolf Erlbruch, The Bear Who Wasn't There: And the Fabulous Forest is classic fable in the making and will prove to be an original and enduringly popular addition.
-- Midwest Book Review

This cheeky book...is a melding of Phantom Tollbooth logic, Alice in Wonderland whimsy, and peppered with a cast of unforgettable Little Prince like characters...You can't help fall into the imaginative world of this delightfully clever picture book.
--BookBloom

One day, a few minutes after Once Upon a Time, a bear awakes to find he has lost something very important: himself He sets out into the Fabulous Forest to find himself, using only a few clues scrawled on a piece of paper: the bear he's looking for is a nice bear; he is a happy bear; and he's very handsome too These sound like pretty good qualities to Bear, and so begins his memorable journey. With the help of Fabulous Forest critters like the Convenience Cow, the Lazy Lizard, and the Penultimate Penguin, Bear finds that he himself is just what he's been looking for all along: a nice, happy bear--and handsome too

As whimsical as Winnie-the-Pooh and as wryly comic as Klassen's bear who wants his hat back, The Bear Who Wasn't There joins a select crew of unusual bears who have captured the imagination of children for generations.

Oren Lavie has green eyes, long curly hair, and relatively cold feet. He was born in June, one week behind schedule, and has been trying to catch up ever since. He likes to sleep late but does his best writing early in the morning, which is why his best writing so rarely gets done. Oren is a musician, director, and author of children's books. His debut album, The Opposite Side of the Sea, was released worldwide to critical acclaim, winning him the prestigious ASCAP Foundation Sammy Cahn Award for his lyrics. The music video for Her Morning Elegance was nominated for a Grammy Award and became a YouTube hit. Oren wrote A Dance 'Round the Memory Tree for The Chronicles of Narnia: Prince Caspian movie. The Bear Who Wasn't There is his first book to be published in the US. Wolf Erlbruch is one of Germany's most renowned illustrators; his work is respected and loved around the world. Among his many awards, Wolf has received both the Gutenberg and the German Children's Literature Award, as well as a Hans Christian Andersen Illustrator Award. His previous book, Duck, Death and the Tulip, sold more than 100,000 copies and was published in nineteen countries.
Loading...
or support indie stores by buying on