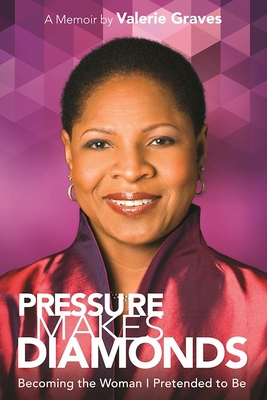 Becoming the Woman I Pretended to Be

When you get dealt a tough hand, you might choose to fold or you might decide to hold. If you're Valerie Graves, you reshuffle the whole damn deck...Graves's can't-stop-won't-stop energy offers a jump start toward meeting objectives and renews hope. Pressure Makes Diamonds is about more than overcoming.
--Essence Magazine

This is the unflinching memoir of a Black woman's journey from the projects of Motown-era Michigan to the skyscrapers of Madison Avenue and beyond.
--New York Beacon

A gem of a book . . . Valerie Graves has spun an appealing narrative with a protagonist who reads like an African-American female counterpart of Horatio Alger. Her journey from Mud Lake, Pontiac, an exurb of Detroit, to a corner office on Madison Avenue is exhilarating, marking her rise to the upper echelons of advertising and providing readers with an expos of her creative life and the world ruled by 'Mad Men.'
-- New York Amsterdam News

Graves paints the picture of how she was a determined woman who faked it till she made it--and made it big. An] inspirational memoir.
--Black EnterpriseLibrary Journal

Graves established herself as a fierce force in the advertising field and a greatly admired role model for black professionals establishing themselves in American business. In a moving book steeped in perseverance and empowering determination, the author fully embodies the challenges of her culture and those of being a motivated businesswoman . . . Optimistic and galvanizing, Graves' message of hope and hard work is timely and applicable.
--Kirkus Reviews

Barrier-breaking, highly celebrated creative director and advertising executive Graves is about more than glittery and impressive national advertising campaigns and her association with international celebrities and various Fortune 500 companies . . . No one was looking for her, but she showed up, spoke directly to the public, and captured the world's attention. Graves' well-told tale, set against a detailed social and cultural backdrop, of courage and success both personally (including a happy marriage) and professionally is moving and inspiring.
--Booklist

A story about an accomplished woman who is the epitome of grit . . . Whether recalling the guilt she felt as a working, absentee parent, or how she came to adopt new age thinking, the author's storytelling skills and use of humor, imagery, and figurative language is noteworthy. At an early age, Valerie decided she would fake it until she made it. Now a success by most standards, she no longer has to pretend. Anyone who enjoys reading about those who travel difficult paths in life will find Pressure Makes Diamonds to be inspirational.
--Foreword Reviews

This is the unflinching memoir of a female African American advertising executive's unprecedented and unlikely success, which began in the Mad Men era. It follows her journey from the projects of Motown-era Michigan to the skyscrapers of Madison Avenue and beyond. With marches, riots, and demonstrations as the backdrop, and rock 'n' roll as a soundtrack, this book accompanies Graves as she traverses the seismically shifting terrain of 1960s and '70s America on her quest to be somebody.

In the '80s and '90s, as Graves makes her ascent to the East Coast heights of the white male-dominated advertising world, she turns familiarity with harsh realities like racism and sexism into robust insights that deeply connect with African American consumers. During the golden era of black advertising, she becomes an undisputed somebody. Soon, though, she learns that money, success, a good marriage, and connections that reach all the way to the White House cannot entirely insulate her against the social ills that threaten to crush black Americans.

Valerie Graves, whom Advertising Age magazine named one of the 100 Best and Brightest in the entire industry, is a nationally recognized creative director of such Fortune 500 accounts as Ford, General Motors, AT&T, Burger King, General Foods, and Pepsi. A former teenage parent from the factory town of Pontiac, Michigan, Graves broke barriers in advertising as one of the first black copywriters at BBDO, Kenyon & Eckhardt, and JWT. She went on to an award-winning career as chief creative officer at the UniWorld and Vigilante/Leo Burnett agencies, senior vice president of creative services at iconic Motown Records, and creative consultant to President Bill Clinton. In 2007, recognizing Graves's stellar career and public service via the Advertising Council and the Partnership for a Drug-Free America, industry coalition ADCOLOR granted her the title of Legend. She resides in New York City.
Loading...
or support indie stores by buying on