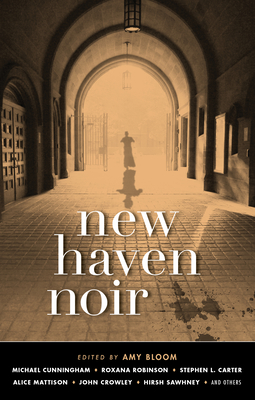 In an Ivy League town, Bloom turns Yale's motto--Lux et Veritas--on its head, finding darkness and deceit in every corner of New Haven...The stories Bloom chooses share a strong sense of place, detailing the quirks that make every corner of New Haven distinctive. But it's the lucid writing and clear, compelling storylines that make her dark tales shine. Maybe she offers a noir version of Light and Truth after all.
--Kirkus Reviews

Town-gown tensions highlight several of the 15 stories in this stellar Akashic noir anthology set in the Elm City...This volume] is particularly strong on established authors, many of whom have impressive credentials outside the genre.
--Publishers Weekly, Starred Review

It's] a kick to see Elm City haunts and issues weaved into short stories of intrigue by writers who know the turf.
--New Haven Register

Fifteen writers, many from Connecticut, including Bloom, have contributed stories to the book. Some stories are classic film noir-style, in which an unscrupulous woman leads a desirous man to his own destruction. Some tell stories of criminal youths meeting someone they underestimated, undermining their cocky street-smarts. Other stories tell of Yalies whose sophisticated exteriors hide a seething hunger for recognition. A few stories go full-on eerie, such as the shy catalog artist who is not the person he seems to be, and the unseen man in Room 11 of the Duncan Hotel, whose daily activities are a mystery to the hotel staff. Town vs. gown tensions pop up in several stories, as do dark narratives reflecting the city's history of racial tensions.
--Hartford Courant

Fifteen of New Haven's literary lights have put ink to paper (or bytes to screen?) to summon that 'noir' city of the imagination that lurks just below the rapidly gentrifying surface.
--New Haven Independent

Akashic Books continues its award-winning series of original noir anthologies, launched in 2004 with Brooklyn Noir. Each book comprises all new stories, each one set in a distinct neighborhood or location with the respective city. Amy Bloom masterfully curates a star-studded cast of contributors, including Michael Cunningham, Stephen L. Carter, and Roxana Robinson, to portray the city's underbelly.

From the introduction by Amy Bloom:

New Haven may be a noir town but, even though noir usually manages not to, we have heart. The chance to bring together some of my favorite writers, in my adopted hometown (in every place I bartended, the cook or the manager carried a .38 in his waistband, and I can still make ten kinds of boilermakers), was a joy and a privilege. Every single story is a noir gem...If you are an optimist, noir may be an antidote, a crisp, dry balance for your sunny outlook. If you are a pessimist (or, as we say, a realist), noir is your home ground, your tribe. It's not just that you expect ants to come to the picnic; you know damned well that there will be ants at the picnic. When they come, you're relieved. When they crawl up your brother's leg, you're reassured and possibly delighted. But the other side of noir is the moral center. The center may be shabby, frayed, and in serious need of a facelift, but it is a center. It's not necessarily heroic. It's likely to be cynical, and its resilience is not the showy kind. Mean streets, as Raymond Chandler once said, not but mean.

Amy Bloom is the author of three novels, three collections of short stories, a children's book and a collection of essays. She has been a nominee for both the National Book Award and the National Book Critics Circle Award. Her stories have appeared in Best American Short Stories, Prize Stories: The O. Henry Awards, Tin House and numerous anthologies here and abroad. She has written for the New Yorker, the New York Times Magazine, the Atlantic Monthly, among many other publications, and has won a National Magazine Award for Fiction. Her best-selling novel, Away, was an epic story about a Russian immigrant. Her most recent and best-selling novel, Lucky Us, came out in 2014. She lives in Connecticut and taught at Yale University for the last decade. She is now Wesleyan University's Shapiro-Silverberg Professor of Creative Writing.
Loading...
or support indie stores by buying on