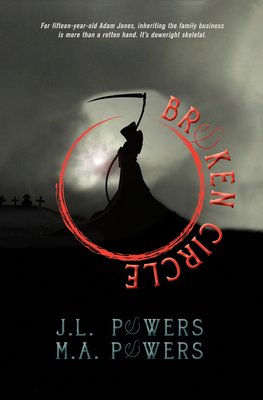 "The Powerses' worldbuilding and writing will keep readers] hooked. They will find themselves questioning what is fact and what is fiction and cheering Adam on as he journeys in this new, strange world. A gripping, philosophical paranormal thriller."
--Kirkus Reviews

"In this intriguing tale of life and death (literally, there are soul guides and a grim reaper), siblings J. L. and M. A. Powers explore the intersections of fear and power in relation to limbo, as Adam and his newfound friends try to become everything they are supposed to be... This] will keep readers on the edge of their seats, wanting more--which is good, considering this is the first of a series."
--Booklist

"This novel was well constructed and rich in detail. The characters are well rounded and realistic...I enjoyed this novel very much and am excited for the next book in the series. I would recommend this novel to fans of Reaper fiction and any fantasy."
--Life My Way (blog)

"If paranormal is your thing...give this one a try."
--Reading Through Life

"You won't want to put this one down: it's Hogwarts for soul guides, with family rivalries and developing powers aplenty. The writing flows and the characters have a rich depth to them, even with their own secrets that we may or may not find out before this volume ends. Thank goodness it's the first in a series; I have more to look forward to and so will you. Give this to your Gaiman fans, for sure; hand it to your Potterheads that are ready to meet a new group of friends. Give it to your readers that enjoy seeing life from a different point of view."
--Mom Read It

"Broken Circle is perfect for anyone who has ever been intrigued by figures of death (like the Grim Reaper, or the Underworld), enjoys YA fiction, and also likes boarding school settings."
--Utopia State of Mind (blog)

"Broken Circle's exacting mix of myth, science and the paranormal discloses that the whole world's destiny is at stake if powers and abilities like Adam's fall into the wrong, crepuscular hands. The Powerses have placed a sympathetic kid and his crew bravely in the midst of some very big questions (it's OK to think Harry Potter). What happens gives a different spin to everything on Earth and whatever may come after."
--The Center for Fiction/Junior Edition column

Adam wants nothing more than to be a "normal" teen, but his reality is quickly leaking normal. Afraid to sleep because of the monster that stalks his dreams, Adam's breakdown at school in front of his crush Sarah lands him in the hospital.

As he struggles to cope with his day-to-day life, Adam can only vaguely comprehend some sort of future. His mother died when he was only four and his eccentric father--who might be an assassin, a voodoo god, the reincarnation of the Buddha, or something even stranger--is never available when Adam really needs him. Even his paranoid grandfather, who insists that people are "out to kill the entire family," is no help.

Adam's life takes an even weirder turn when a fat man with a gold tooth and a medallion confronts his father regarding Adam's supposed "True Destiny." Adam is soon headed toward a collision with life, death, and the entities charged with shepherding souls of the newly dead, all competing to control lucrative territories where some nightmares are real and psychopomps of ancient legends walk the streets of North America.

J.L. Powers is the award-winning author of three young adult novels, The Confessional, This Thing Called the Future, and Amina. She is also the editor of two collections of essays and author of a picture book, Colors of the Wind. She works as an editor/publicist for Cinco Puntos Press, and is founder and editor of the online blog, The Pirate Tree: Social Justice and Children's Literature. She teaches creative writing, literature, and composition at Skyline College in California's Bay Area, served as a jurist for the 2014 NSK Neustadt Prize for Children's Literature, and is launching Catalyst Press in 2017 to publish African writers. M.A. Powers is J.L.'s "little" (but much taller) brother. He has a PhD in the oncological sciences from the Huntsman Cancer Institute at the University of Utah in Salt Lake City. He is currently a stay-at-home dad and lives in Maine.
or
Buy Here
Copyright © 2020 American Booksellers Association