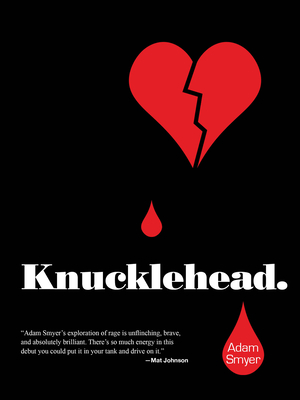 Knucklehead is the only title shortlisted for the 2018 Ernest J. Gaines Award for Literary Excellence

"By setting his novel in the '90s, Smyer, who lives in Oakland, has crafted some brutal deja vu. As protagonist] Marcus reflects on Rodney King, the Million Man March and the Oklahoma City bombing, we think of Freddie Gray, Black Lives Matter and school shootings that have become a way of life. And when Marcus laments San Francisco's dwindling black population, here we are more than 20 years on, and it's only gotten worse. We should all be furious."
--San Francisco Chronicle

"Here is a list of things you'll need to read this book: ample space for stretching out the side stitches you'll get from laughter; half a box of tissues for the most gripping and harrowing dramas at the heart of the novel; a fresh stress ball for the tense situations the protagonist finds himself in (both of his own doing and not); and just a bit of that space in your heart to see people, in all their complexity, trying to do their best."
--Pittsburgh Post-Gazette

"This book is bold in how it treats the reader as an insider to the reality of American blackness. It can be, in turns, lyrically poignant, cynical, hilarious, and infuriating."
--Foreword Reviews, Starred Review

"In this comic debut novel, lawyer Marcus Hayes careens through the racially divisive 1990s while trying to manage his compulsive anger, chaotic love life, and economic misfortunes...Smyer gives Marcus a sardonic and hilarious voice reminiscent of a Paul Beatty protagonist and endows him with a troubled psychology that plumbs the nuances of black male identity."
--Kirkus Reviews

"Marcus is an intelligent, acerbic, and often hilarious narrator, bringing a fresh, biting perspective to the social and racial tensions of the time that, as debut novelist Smyer makes clear, are not particularly different from today."
--Library Journal

"While loss and loneliness are at its core, Knucklehead is a mordantly funny book."
--San Francisco Chronicle

"While not strictly a crime novel, Smyer's debut Knucklehead does contain a whole lot of guns, violence, and rage, as well as plenty of love and sadness. A black lawyer in the late 80s through the mid-90s deals with micro and macro aggressions from a society determined to treat him as a criminal. Also, there are cats. Lots of cats."
--Literary Hub

"While the provocative subject material will take readers to a sometimes-uncomfortable place, this brilliant debut is also deeply, darkly funny...This is one of those books that simply has to be discussed, as it managed to tackle difficult topics with unexpected humor and pathos. While Marcus is a troubled character, his journey and the choices he makes will provide rich meat for discussion about race in America and how justifiable anger can turn toxic."
--IndiePicks Magazine

" A] masterpiece...In this, his debut narrative, Smyer dramatically encapsulates the ancestral trauma, the collective guilt and suffering of tens of millions of people. Indeed he has scored big. Real big...A must buy."
--Kaitur News (Guyana)

"Smyer's debut explores themes of the self in chaos; the prose is clean as bone and the anger is focused and piercing."
--Michigan Quarterly Review

In Knucklehead we meet Marcus Hayes, a black law student who struggles, sometimes unsuccessfully, with the impulse to confront everyday bad behavior with swift and antisocial action. The cause of this impulse is unknown to him.

When Marcus unexpectedly becomes involved with the brilliant and kind Amalia Stewart, her love and acceptance pacify his demons. But when his demons return, he is no longer inclined to contain them.

ADAM SMYER is an attorney, martial artist, and mediocre bass player. Adam's nonfiction has appeared in the Johannesburg Review of Books, and his debut novel, Knucklehead (Akashic Books), was the sole title short-listed for the 2018 Ernest J. Gaines Award for Literary Excellence. Adam lives in the San Francisco Bay Area with his wife and cats.
Loading...
or support indie stores by buying on