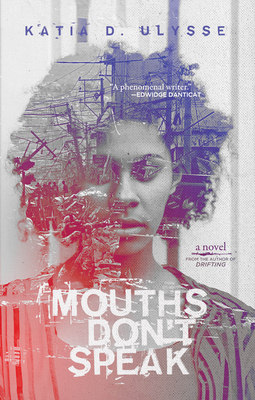 After the 2010 Haiti earthquake kills her parents, a woman returns to Haiti after leaving it as a child, 25 years ago. A powerful and engrossing story, this read cannot be missed.
--Bustle, 35 Most Anticipated Fiction Books of 2018

In this fascinating novel about Haitian life, Ulysse beautifully braids together the struggle for personal redemption with the struggle for dignity and human rights.
--Rain Taxi Review of Books

Ulysse gives readers a riveting story of a woman who is trying to make sense of a homescape that, if not wholly disappeared, is irrevocably altered.
--BuzzFeed

With lush descriptions and Creole-inflected dialogue, Katia D. Ulysse frankly and deftly writes about the nuances and class differences in Haiti. Mouths Don't Speak explores how trauma touches us at home and abroad, wherever those places may be. This includes the experiences of the underserved kids Jacqueline teaches, American veterans, the earthquake victims, and children and their parents. Ulysse illustrates the complicated but unbreakable connections we have to family and home, and shows how privilege doesn't necessarily keep you from tragedy.
--Shelf Awareness

A captivating portrait of a woman plagued with worry about family and homeland, this beautifully written novel recalls Toni Morrison's Paradise.
--Library Journal

Powerful...As Ulysse explores grief, she moves beyond her protagonist to consider the murky motivations and emotions of other characters. This is a harrowing, thoughtful dive into the aftermath of national and personal tragedies filtered through diasporic life.
--Publishers Weekly

Ulysse punctuates...descriptions of the lush Florestant plantation with insightful observations about strained family dynamics. The ties that bind can also constrict us.
--Booklist

In Drifting, Ulysse's 2014 story collection, Haitian immigrants struggle through New York City after the 2010 earthquake that destroyed much of their county. In her debut novel, Ulysse revisits that disaster with a clearer and sharper focus. Jacqueline Florestant is mourning her parents, presumed dead after the earthquake, while her ex-Marine husband cares for their young daughter. But the expected losses aren't the most serious, and a trip to freshly-wounded Haiti exposes the way tragedy follows class lines as well as family ones.
--The Millions

Within minutes of starting Katia D. Ulysse's novel--with settings in contemporary Haiti and America, and characters caught in the aftermath of Haiti's earthquake of 2010--the reader is drawn deep into an intricate tale of family and relationships across cultures... Main character] Jacqueline Florestant's route is no easy one, but her story puts an individual face on the generalized social stigmas of Haiti.
--Island Origins Magazine, included in Summer Reading Roundup

No one was prepared for the massive earthquake that struck Haiti in 2010, taking over a quarter-million lives, and leaving millions of others homeless. Three thousand miles away, Jacqueline Florestant mourns the presumed death of her parents, while her husband, a former US Marine and combat veteran, cares for their three-year-old daughter as he fights his own battles with acute PTSD.

Horrified and guilt-ridden, Jacqueline returns to Haiti in search of the proverbial closure. Unfortunately, the Haiti she left as a child twenty-five years earlier has disappeared. Her quest turns into a tornado of deception, desperation, and more death. So Jacqueline holds tightly to her daughter--the only one who must not di.

Katia D. Ulysse is a fiction writer, born in Haiti. Her short stories, essays, and Pushcart Prize-nominated poetry appear in numerous literary journals and anthologies, including: The Caribbean Writer, Smartish Pace, Phoebe, Meridians: feminism, race, transnationalism; Mozayik, The Butterfly's Way: Voices from the Haitian Dyaspora in the United States, and Haiti Noir, edited by Edwidge Danticat. She has taught in Baltimore public schools for thirteen years, and served as Goucher College's Spring 2017 Kratz Writer in Residence. Drifting, a collection of short stories, drew high praise from literary critics. She is currently at work on another short story collection. Mouths Don't Speak is her latest novel.
Loading...
or support indie stores by buying on