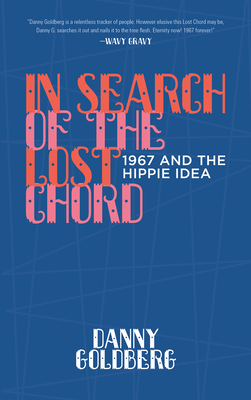 In Search of the Lost Chord

A legendary steward of the hip musical world...Goldberg plunges into a thorough, panoramic account of the culture, politics, media, music and mores of the year to demolish the idea that it was trivial. He has researched and interviewed widely--his section on underground newspapers is impressively detailed--and he's been there with many of the principals through all these years...Goldberg's deep purchase on his subject and his storytelling ease make it fresh...Personal asides give the account intimacy... The book proves] that so much activism and passion can be crowded into barely more than a single year. When Goldberg was writing his book, that might have been a useful message. Today, in Trump's America, with a fueled and gathering resistance, it is a potentially mirroring one.
--Sheila Weller, New York Times Book Review

Goldberg's] newest book, In Search of the Lost Chord: 1967 and the Hippie Idea, explores and fuses together the musical, political and spiritual revolutions of the time into a narrative about a moment when 'there was an instant sense of tribal intimacy one could have even with a stranger.'
--Rolling Stone

Goldberg brings a personal passion that itself illustrates the lasting resonance of the hippie era.
--Publishers Weekly

A reminiscence of the time that brought us Sgt. Pepper and the Summer of Love...A genial you-were-there memoir of a golden age.
--Kirkus Reviews

Written with the acuity of someone who lived through the times he writes about, this is a thoughtful and wide-ranging exploration not just of one year in history but also of a culture and a way of thinking that continues to reverberate today.
--Booklist

Goldberg's] analysis of what it meant to be a hippie in 1967--sans cartoon clich s--recounts the pursuit of wisdom and joy, as well as a crazy quilt of counterculture cool. And despite the demarcation insisted on by some, he shows that spirituality, activism and business are not incompatible.
--High Times

Danny Goldberg's new book is a subjective history of 1967, the year he graduated from high school. It is, he writes in the introduction, an attempt at trying to remember the culture that mesmerized me, to visit the places and conversations I was not cool enough to have been a part of. It is also a refreshing and new analysis of the era; by looking at not only the political causes, but also the spiritual, musical, and psychedelic movements, Goldberg provides a unique perspective on how and why the legacy of 1967 lives on today.

1967 was the year of the release of the Beatles's Sgt. Pepper's Lonely Hearts Club Band, and of debut albums from the Doors, the Grateful Dead, Jimi Hendrix, Janis Joplin, among many others.

In addition to the thriving music scene, 1967 was also the year of the Summer of Love; the year that millions of now-illegal LSD tabs flooded America; Muhammad Ali was convicted of avoiding the draft; Martin Luther King Jr. publicly opposed the war in Vietnam; Stokely Carmichael championed Black Power; Israel won the Six-Day War, and Che Guevara was murdered. It was the year that hundreds of thousands of protesters vainly attempted to levitate the Pentagon. It was the year the word hippie peaked and died, and the Yippies were born.

Exhaustively researched and informed by interviews with Allen Ginsberg, Timothy Leary, Ram Dass, Tom Hayden, Cora Weiss, and Gil Scott-Heron (one of many of Goldberg's high school classmates who entered the culture), In Search of the Lost Chord is a mosaic of seminal moments in the psychedelic, spiritual, rock-and-roll, and political protest cultures of 1967.

Danny Goldberg is the author of How the Left Lost Teen Spirit and Bumping Into Geniuses: My Life Inside the Rock and Roll Business. Since 2007 he has been president of Gold Village Entertainment, whose clients include Steve Earle and Against Me. Previously, Goldberg was president of Gold Mountain Entertainment (Nirvana, Bonnie Raitt, the Allman Brothers), CEO of Air America Radio, chairman of Warner Bros. Records, president of Atlantic Records, and vice president of Led Zeppelin's Swan Song Records.
Loading...
or support indie stores by buying on