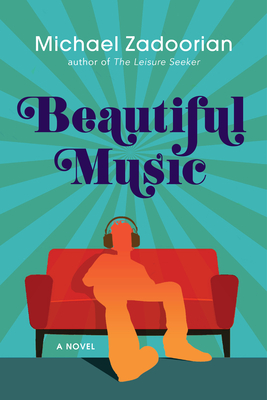 "Danny Yzemski tunes out a dysfunctional family with Frank Zappa and Iggy Pop, shaking his countercultural fist at The Man in this eight-track flashback of a novel set in 1970s Detroit."
--O, the Oprah Magazine, included in Summer Reading Picks/One of 'O's Top Books of Summer

"For Danny, cracking the seal on a fresh piece of wax and dissecting cover art and liner notes are acts of nigh religious experience that unveil to him a community of fellow rockers across Detroit...It's in these small moments--a lonely boy experiencing premature nostalgia--that Zadoorian shines."
--Washington Post

Beautiful Music has been named a 2019 Michigan Notable Book

One of McLean & Eakin's Favorite Michigan Books of 2018

One of the Voice news Michigan Bestsellers for 2018 in Fiction

"Garnering a litany of regional awards from the likes of Voice, McLean & Eakin, and the 2018 Great Lakes Great Reads program, Michael Zadoorian's senior novel Beautiful Music tells of one young Detroiter's transformation through music during a time of political turmoil. Laden with details of the city, the novel is uniquely Detroit. (Some of the bands the protagonist, Danny, listens to are local legends MC5 and Iggy Pop.)"
--Detroit Metro Times, included in the Michigan summer 2019 reading list

"His third novel--Beautiful Music, about a radio-loving teen's transformation through music during the early '70s in Detroit... is] rich with Detroit details (Korvette's, Bill Bonds, Iggy Pop), and] follows Danny through racial tensions at high school, his changing body and his imploding family life."
--Detroit Free Press

" Zadoorian's] new novel speaks of death, race, music and youth in a voice that has been compared to Nick Hornby and Tobias Wolff. It is set in 1970's Detroit at the cusp of punk, and centers around high school loner and music fanatic Danny Yzemski. One to look forward to for fans of rock music and sad, funny writing."
--Cleveland Plain Dealer

"Zadoorian takes us back to Detroit in the 1970s, which was still throbbing from the 1967 rebellion, and was in the throes of the energy crisis and the sexual revolution. Protagonist Danny Yzemski finds that growing up in such times can be...complicated. But with a little help from Iggy Pop, the MC5, and Led Zeppelin, he finds just the boost he needs to survive--and even grow a bit."
--Detroit Metro Times, included in Summer Reading roundup

Set in early 1970s Detroit, a divided city still reeling from its violent race riot of 1967, Beautiful Music is the story of one young man's transformation through music. Danny Yzemski is a husky, pop radio-loving loner balancing a dysfunctional homelife with the sudden harsh realities of freshman year at a high school marked by racial turbulence.

But after tragedy strikes the family, Danny's mother becomes increasingly erratic and angry about the seismic cultural shifts unfolding in her city and the world. As she tries to hold it together with the help of Librium, highballs, and breakfast cereal, Danny finds his own reason to carry on: rock and roll. In particular, the drum and guitar-heavy songs of local legends like the MC5 and Iggy Pop. In the vein of Nick Hornby and Tobias Wolff, yet with a style very much Zadoorian's own, Beautiful Music is a touching story about the power of music and its ability to save one's soul.

Michael Zadoorian is the author of the critically praised The Leisure Seeker--now a film starring Helen Mirren and Donald Sutherland, released by Sony Pictures Classics this year. Zadoorian is a recipient of a Kresge Artist Fellowship in the Literary Arts, the Columbia University Anahid Literary Award, the Great Lakes Colleges Association New Writers Award, and the Michigan Notable Book Award. His other books are Second Hand: A Novel, and the story collection The Lost Tiki Palaces of Detroit. His fiction has appeared in the Literary Review, Beloit Fiction Journal, American Short Fiction, Witness, Great Lakes Review, and the North American Review. He lives with his wife in the Detroit area.
or support indie stores by buying on
Copyright © 2020 American Booksellers Association