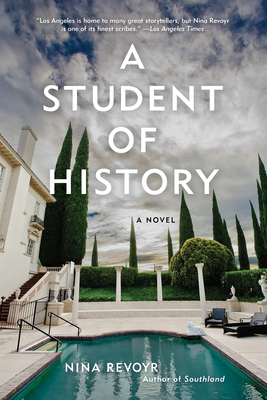 A Student of History

Revoyr is gifted in her ability to deal with complex ideas like racism, class conflict, and sexuality without sacrificing the truth of her narrative. Furthermore, like the most adroit novelists, Revoyr specializes in reversal. All of her books are filled with suspense and sudden surprises that take the stories in unexpected directions...As much as Nina Revoyr herself is a student of history, she's also one of our best teachers.
--Los Angeles Review of Books

Revoyr's latest noir tells a story that's somewhere between Sunset Boulevard and the darker regions of The Great Gatsby...Revoyr is a subtle observer of human foibles and social structures, and the result is one of the most insightful, and the most entertaining books of the year.
--Literary Hub, one of Lit Hub's 50 Favorite Books of 2019

A Student of History is full of research, detail, lush descriptions, and visual place-setting. Revoyr's] a fiction writer with an eye for reality set in a dream-like world, often in her home city of Los Angeles.
--The Rumpus

Any Nina Revoyr novel is a cause for celebration, and her latest, A Student of History, is assured and marvelous, an absorbing rags among riches tale about a broke USC grad student who finds himself swept off his feet by Los Angeles's insular, powerful .01% class. It's a contemporary novel that feels like an instant classic, with the wry tragedy of The House of Mirth, the sinister glamour of Sunset Boulevard, and a fresh, original point of view.
--CrimeReads

With a nod to Great Expectations and The Great Gatsby, Rick Nagano is Nick Carraway and young Pip rolled into one...Lambda Award-winner Revoyr focuses on the impact of race in the construct of class and society, and how there are some doors that will always remain closed.
--The Advocate

Nina Revyor's new novel, A Student of History, continues the tradition of the Los Angeles oil novel, but steers it in a new direction.
--Rain Taxi Review of Books

With her two Walter Mosley-like gifts--impeccable narrative pacing and masterful command of Los Angeles' intricate, evolving dynamics of race and class--Nina Revoyr's LA novels convincingly capture the lifespan of Los Angeles as a major city, none more gracefully than A Student of History.
--New York Journal of Books

Rick Nagano is a graduate student in the history department at USC, struggling to make rent on his South Los Angeles apartment near the neighborhood where his family once lived. When he lands a job as a research assistant for the elderly Mrs. W--, the heir to an oil fortune, he sees it at first simply as a source of extra cash. But as he grows closer to the iconoclastic, charming, and feisty Mrs. W--, he gets drawn into a world of privilege and wealth far different from his racially mixed, blue-collar beginnings.

Putting aside his half-finished dissertation, Rick sets up office in Mrs. W--'s grand Bel Air mansion and begins to transcribe her journals--which document an old Los Angeles not described in his history books. He also accompanies Mrs. W-- to venues frequented by the descendants of the land and oil barons who built the city. One evening, at an event, he meets Fiona Morgan--the elegant scion of an old steel family--who takes an interest in his studies. Irresistibly drawn to Fiona, he agrees to help her with a project of questionable merit in the hopes he'll win her favor.

A Student of History explores both the beginnings of Los Angeles and the present-day dynamics of race and class. It offers a window into the usually hidden world of high society, and the influence of historic families on current events. Like Great Expectations and The Great Gatsby, it features, in Rick Nagano, a young man of modest means who is navigating a world where he doesn't belong.

Nina Revoyr is the author of five previous novels, including The Age of Dreaming, which was a finalist for the Los Angeles Times Book Prize; Southland, a Los Angeles Times best seller and Best Book of 2003; and Wingshooters, which won an Indie Booksellers Choice Award and was selected by O, The Oprah Magazine as one of 10 Titles to Pick Up Now. Revoyr lives and works in Los Angeles.
Loading...
or support indie stores by buying on