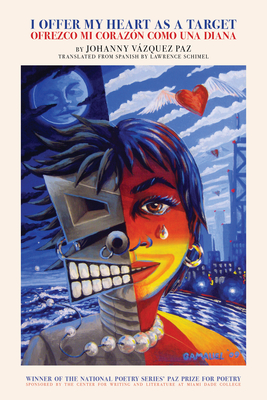 "In this bilingual edition (superbly translated from the Spanish by Lawrence Schimel) Puerto Rican poet V zquez Paz grapples with the violence against the psyche...and with the violence of displacement...These poems are a celebration of female strength and imagination: 'I am a woman: I endure much/ but the day is short.'"
--NBC Latino, one of the Best Latino Books of 2019

"Paz compels us to look closer, and longer, at bodies worn, stressed, and hurt. Often her narrators are hurt by men--in the shadows and under the light, in the past and in the present...Paz's book is full of tradition, tension, and rage."
--The Millions, a Must-Read Poetry Selection for December 2019

"In her powerfully honest verses, Paz explores what it means to be born a U.S. citizen on the island of Puerto Rico, to live with a complexion that allows her to pass for white, and to struggle against the misogyny that runs rampant in both English--and Spanish--speaking cultures."
--Booklist

" A] piercing and timely exploration of gender, violence, and social justice...'Against all prognoses, / we survive, ' Paz] proclaims in this moving book that, with Schimel's skillful translation, highlights resilience in the face of oppression."
--Publishers Weekly

"Winner of the Paz Prize for Poetry, this dual-language book explores perseverance and survival in the face of violence, displacement, and defeat."
--Publishers Weekly, Fall 2019 Adult Announcements (Poetry)

From the introduction by Rigoberto Gonz lez:

A regular heartbeat is composed of the two sounds made when the blood flows through the organ as the valves contract. To listen to its rhythm through a stethoscope is to appreciate the slight distinction between two movements that are unequivocally connected--one beat calls, the other responds. Similarly, the two sections of Johanny V zquez Paz's stunning book of poems offer the reader distinct tones powered by the same source: perseverance...

I Offer My Heart as a Target is a book of victory over silence and the truest testament to what it means to outlive that which has defeated or deflated many. If there's a spirit guiding the courage embedded in its pages, it must be the phoenix, the miraculous being that rises from the ashes reborn, or rather, pieced together again. The heart beats once more. The woman reclaims the word.